Lionsgate Home Entertainment Unleashes The Action On Nov. 25 With DVD And Blu-ray/DVD Combo Pack Editions Of Sly Stallone's The Expendables 3 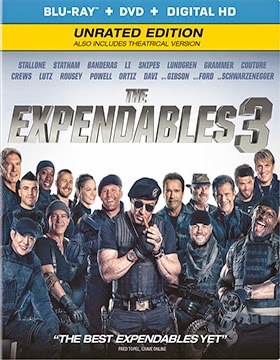 A legion of actions stars of the silver screen (sans Steven Seagal, which seems deliberate and not an oversight) are back for another comic book adventure (which is deliberate) and both Wesley Snipes and Mel Gibson (as good guy and villain respectively) get in on the action this time around.

Stallone makes no pretense with this series … it is tongue-in-cheek and is basically just a bunch of good ole’ boys getting together to blow things up.  And that’s exactly what you get (in spades)!  So have fun!

Bonus features include an extended, unrated cut of the film (exclusive to the Blu-ray SKU), a gag reel, extended and deleted scenes, a pair of production featurettes — “New Blood: Stacked and Jacked” and “The Total Action Package” — plus an The Expendables 3 documentary.