CJ Entertainment America Will Release DVD And Blu-ray Editions Of The Admiral: Roaring Currents On Apr. 28 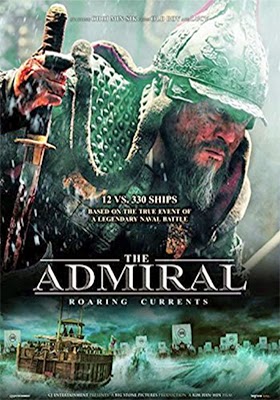 Facing certain defeat and the fall of the capitol city of Joseon (aka: Seoul), the disgraced former commander of the Korean fleet (what remained of it) returns and in October of 1597 at the Battle of Myeongnyang (Straits) turns back a vastly superior Japanese invasion fleet.

It is all true and this eerily similar Korean version of the English defeat of the Spanish Armada (which occurred just nine years earlier) is the backbone of Korean filmmaker Han-min Kim’s (Warrior of the Arrows, Paradise Murdered) naval battle blockbuster, The Admiral: Roaring Currents.

CJ Entertainment America has tabbed Apr. 28 as the release date for both DVD and Blu-ray editions of this international box office smash … even the domestic take for this Korean-language film delivered an impressive $2.6 million in ticket sales (that’s an outstanding number for a foreign-language import).

The film is neatly divided into two sections.   The first half of the film introduces us to Admiral Yi Sun-shin (Choi Min-sik — Lucy, Tae Guk Gi: The Brotherhood of War, Oldboy, etc.), the commander of the Korean fleet, who falls victim to corrupt palace intrigues of the floundering Joseon Dynasty and is stripped of his command.   During his imprisonment the Japanese nearly decimate the once superior Korean naval forces … the invasion and the fall of the Joseon Dynasty is at hand. 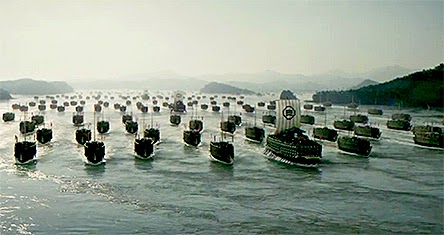 The second half of the film contains one of the most spectacular naval battle sequences ever filmed!   Admiral Yi is returned to his command — the fleet has been reduced to just a dozen ships — and is given the impossible task of turning back the on-rushing Japanese fleet of over 300 ships!    The rest, they say, is history … Admiral Yi accomplished the same as Sir Francis Drake (an his allies) in turning back a vastly superior invasion fleet … and in Admiral Yi’s case, with the odds heavily stacked against him.

If you missed the domestic theatrical run of The Admiral: Roaring Currents, then circle Apr. 28 on your calendar now … this is one that should not be missed!!

Email ThisBlogThis!Share to TwitterShare to FacebookShare to Pinterest
Labels: CJ Entertainment America Will Release DVD And Blu-ray Editions Of The Admiral: Roaring Currents On Apr. 28, DVD and Blu-ray Release Report