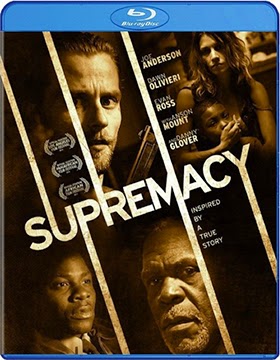 A showcase theatrical run is currently running its course to garner critical awareness … the film worked the festival circuit last summer before being picked up by Well Go U.S.A. for domestic distribution.

The story, which is drawn from actual events, gives one pause as to making any assumptions about how this, or any other, day might unfold.   A seemingly routine day can be anything but that … death awaits with only luck and fast thinking keeping it at bay.

The film jumps right in with the release from prison of Garrett Tully (Joe Anderson — The Twilight Saga: Breaking Dawn - Part 2, The Crazies, The Grey etc.), a poster boy for rage, racism and downright stupidity.   He’s scraping the bottom of the gene pool and has been doing hard time for past sins and in the process of his “rehabilitation” he’s become a soldier for the Aryan Brotherhood.

You can’t help but think, as he makes his way to his ride, that society would be best served by leaving this tattooed scum to rot in prison … there is no useful purpose in having him back on the streets.    But it doesn’t work that way.

His ride, a stranger, is a piece of hard road by the name of Doreen (Dawn Olivieri — as Andie Star in The Vampire Diaries), who looks strung-out and, in a word, pathetic.   What wrong turn did she make on her personal highway to hell … but that’s another story.

She has an assignment for him — delivered by his prison master — but before they can get to work they are pulled over by a state trooper, which sets Tully into panic mode.   That encounter doesn’t end well.

So there is your preface to this story that is about to take a nasty turn.   A racist convict gets paroled, is picked up by white trash and a cop is killed.   They are now on the run and select a seemingly empty rural hideaway to lay low … welcome to Mr. Walker’s home!

The place isn’t empty after all.  It’s the home to Mr. Walker, a black man (Danny Glover) and his wife, which means that they are expendable.   But if that were to happen, then we wouldn’t have much of a story.

As “luck” would have it, Walker is also an ex-con, and if the truth be known a bit of a sociopath, who quickly sizes up the situation and sets to work — for survival sake — on manipulating Tully and Doreen.   The bulk of the film plays out here and filmmaker Deon Taylor does an exceptional job of creating a claustrophobic tinderbox that becomes the set piece of rage, mind-games and hidden truths (lies).   The tension builds and the ultimate outcome is never clear!

Yes, you never know how the day will unfold … director Deon Taylor’s Supremacy is the perfect case in point.