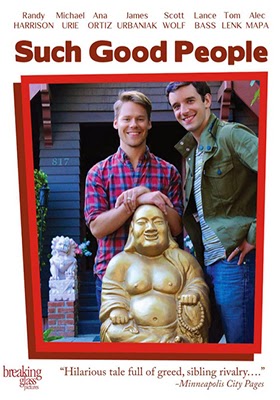 When a gay house-sitting couple discover a mountain of cash it’s time for the fun to being … screwball-style!

That’s the news this week from Breaking Glass Pictures, which has tabbed Apr. 14 as DVD debut date for Stewart Wade’s throwback screwball comedy, Such Good People.

Richard (Michael Urie) and Alex (Randy Harrison) are a happy couple, who couldn’t be happier when wealthy couple, Jake (Scott Wolf) and Chloe (Kate Reinders), invite them to watch over their place while they head off to remote Bhutan for their latest round of “charity” work.   What a deal!

Word arrives that the philanthropic couple have been killed in a tragic auto accident, but in the meantime the boys have found a secret room full of cash and what appears to be stolen art treasures from the Far East.   Perhaps the “charity” work was just a front, but no matter, the cash is a temptation that they simply cannot resist. 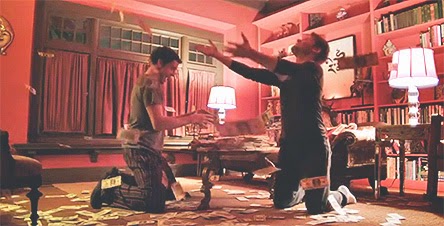 Soon Paige (Carrie Wiita), the sister of Alex, with her husband Cooper (James Urbaniak) in tow, arrive on the scene and do a little house searching of their own and come up empty.   And here is where the fun begins … Paige is damn-certain that her brother has uncovered Jake and Chloe’s illicit secret (and stash of cash) and she wants her “fair share.”

Bonus features include a blooper reel, deleted scenes and a behind-the-scenes featurette.