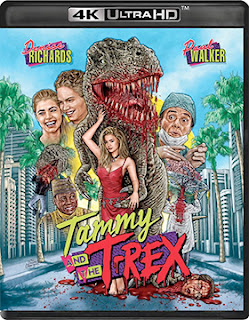 In the waning days of VHS, indie Imperial Entertainment took to market during the December Christmas Holiday crush of 1994 a bizarre mixed-genre film from director Stewart Raffill — the same director who had delivered the indie smash sci-fi hit, The Philadelphia Experiment, ten years earlier.   The film was titled Tammy and the T-Rex and it came and went in the blink of an eye.

The star of the film hit it big three years later with director Paul Verhoeven’s Starship Troopers and director John McNaughton’s Wild Things.   Of course, this is Denise Richards (and it was her first “starring” role … after some TV episodic work and a couple of bit parts), who stars as a high school cheerleader who is in love with a T-Rex … but it gets better.

Opposite her is none other than Paul Walker (Pleasantville, Varsity Blues and The Fast and the Furious were all soon to follow) as her high school sweetheart, who is killed by a jealous rival, but has his brain transplanted into a dinosaur (seriously) by a mad scientist (Terry Kiser — best known as Bernie Lomax in the Weekend at Bernie's movies). 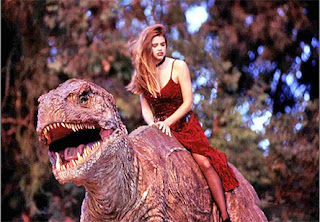 News arrived this past week that Vinegar Syndrome has unearthed this lost film classic and has a new 4K restoration on the way from the 35mm original camera negative on Friday, Nov. 29.   And get this, it will be their first 4K Ultra HD/Blu-ray Combo Pack product offering … that’s right, a 4K Ultra HD edition of Tammy and the T-Rex.   A Blu-ray/DVD Combo Pack will also be available.

Genre fans will have two viewing options.   The heavily-edited “PG-13” version and available for the first time an uncut presentation of the film — extra gore and more!!!

Bonus features include commentary from director Stewart Raffill, who is joined by producer Diane Kirman (aka: Mrs. Stewart Raffill) and four featurettes — “Blood, Brains and a Teenage T-Rex,” “A Blast from the Past,” “Having the Guts” and “A Testicular Stand-Off.”

Email ThisBlogThis!Share to TwitterShare to FacebookShare to Pinterest
Labels: Vinegar Syndrome Preps 4K Ultra HD Release Of Tammy And The T-Rex For Delivery On Friday Nov. 29