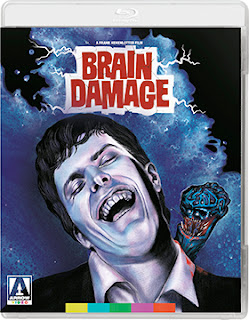 Filmed in New York City in early 1987, Brain Damage reached theatres one year later.   The working title was Elmer the Parasite, but fans of Henenlotter’s brain-feast film know that “Elmer” is really Aylmer (Old English for famous; inspiring and the like), but Elmer will do.   At least that’s what Dr. Ackerman (Theo Barnes) and his wife, Martha (Lucille Saint-Peter), call the little brain sucker, who they’ve been feeding in their apartment when we have that first meet-the-creature moment.

Living next door is Brian (Rick Hearst, aka: Rick Herbst … after this film he became a soap opera regular with stints on The Young and the Restless, The Bold and the Beautiful, Days of Our Lives and more) and the creature — make that, parasite — takes a liking to him.   A symbiotic relationship develops with Brian hauling Elmer (voiced by John Zacherle) around the city to feast on human brains, while Elmer “feeds” his host with a blue liquid (though a puncture wound in the back of his neck) that sends him on psychedelic trips. 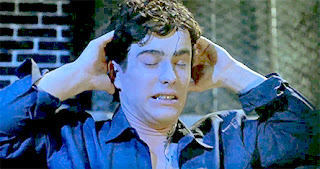 Everything is going along swimmingly until … come on, we can’t give that away, but let’s just say that Brian’s love interest, Barbara (Jennifer Lowry … her career moment), gets a kiss to remember.

Filmmaker Frank Henenlotter had fun with his creature features — Basket Case (1, 2 and 3) and Frankenhooker — before turning his attentions to the business of Something Weird Video.   Indie horror at its best … with a sense of humor. 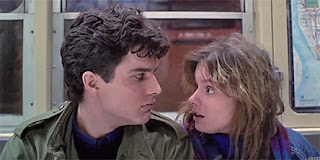 Bonus goodies on the Blu-ray release of Brain Damage from Arrow Video on Feb. 4 include commentary from Henenlotter, Elijah Drenner’s 2017 documentary titled Listen to the Light: The Making of Brain Damage, five featurettes — “The Effects of Brain Damage,” “Animating Elmer,” “Karen Ogle: A Look Back,” “Elmer’s Turf: The NYC Locations of Brain Damage” and “Tasty Memories: A Brain Damage Obsession — and the animated short film by Harry Chaskin titled Bygone Behemoth.

Additionally, there is a Q&A session from the 2016 Offscreen Film Festival featuring filmmaker Frank Henenlotter. 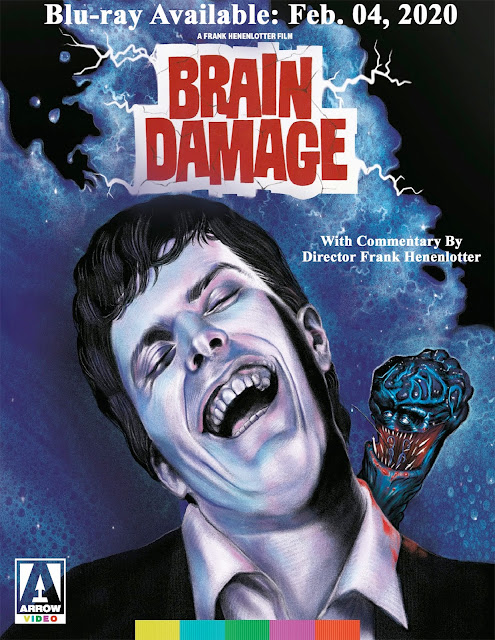