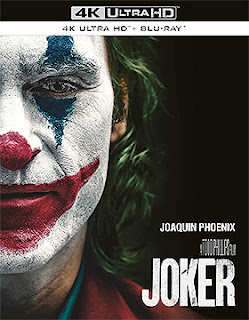 It was tough to keep it a secret.   With Best Buy, iTunes and Target all starting to take orders for a Jan. 7 street date over the Thanksgiving holiday weekend and Ingram Distribution’s Videoeta website jumped in to confirm that date, Warner Bros. Home Entertainment got ambushed.

With so many outlets running with that first street-date Tuesday in 2020 as the release date for writer/director Todd Phillips’ Joker, starring three-time Oscar nominee Joaquin Phoenix as the title character, who are we to stand in the way of the onrushing mob.

Planned for release are Blu-ray/DVD and 4K Ultra HD/Blu-ray Combo Packs, as well as a stand-alone DVD edition.

A masterful film, Joker more or less turns the entire Bruce Wayne mythology on its head.   Thomas Wayne, Bruce Wayne’s father, and his Wayne Enterprises is a corrupt outfit and the Wayne empire is built on the oppression of the poor.   To make it even more madding, Arthur Fleck (Joaquin Phoenix’s character), may actually be Bruce Wayne’s illegitimate half-brother who has been denied his birthright. 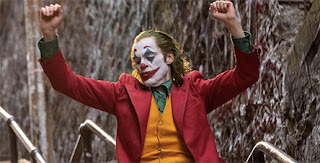 Ah, but then again, filmmaker Todd Phillips (best known for The Hangover trilogy), and his co-writer Scott Silver (The Fighter, 8 Mile), have made Arthur Fleck/Joker so delusional that it is difficult to separate what is really real versus Fleck’s interpretation of reality.

And that is precisely why the film works so well.   Crazy, violent, but sympathetic in an odd sort of way, Fleck could be all he imagines he is or not.  Victim, hero, anti-hero or insane psychopath … he literally covers all of the bases and in the process Joaquin Phoenix has crafted an Oscar-worthy performance as Batman’s future arch-nemesis.