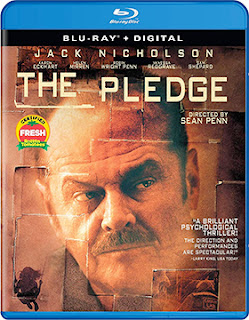 Mill Creek Entertainment has a deal all lined up on Oct. 13 for those who love to collect affordable Blu-ray releases of their favorite films that is as easy as One, Two, Three!

Available for the first time on Blu-ray on Oct. 13 from Mill Creek Entertainment will be actor-turned-director Sean Penn’s 2001 film adaptation of the Friedrich Dürrenmatt 1958 short novel, “The Pledge: Requiem for the Detective Novel,” which was shortened for its theatrical release to simply, The Pledge.

Jack Nicholson stars as detective Jack Black, who we meet on the day of his retirement party.   The festivities are interrupted with news that the body of a young girl has been found … brutally murdered.

Out of instinct, habit, and technically he is still on the job, Black tags along to the crime scene and later meets with the girl’s mother, Margaret Larsen (Patricia Clarkson), and makes her a “pledge” that he will find her daughter’s killer.

It could have been a very short movie and the pledge honored in no time.   A suspect by the name of Toby (played by Benicio Del Toro) is tracked down and while being grilled, snatches a gun from one of the deputies and kills himself.   Case closed!!

But Black is not so sure.   Toby doesn’t fit the description of the “giant” that the little Larsen’s daughter gave to her grandmother … the details do not fit.   Thus begins a quest for the real killer, which brings the loner Jack Black love and family for the first time in his life.   Ironically, this miracle is snatched from him when his obsession to fill the “pledge” clouds his judgment. 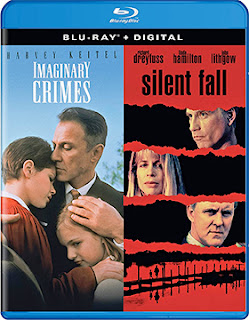 The Pledge, that’s one.   We told you that this Mill Creek Entertainment Blu-ray promotion on Oct. 13 would be as easy as One, Two, Three.    Here’s the “Two,” the double-feature Blu-ray presentation of director Anthony Drazen’s 1994 film adaptation of Sheila Ballantyne’s 1982 coming-of-age novel, Imaginary Crimes, teaming Harvey Keitel with Fairuza Balk as father and daughter at odds with each other, and director Bruce Beresford’s 1994 mystery/thriller, Silent Fall, starring Richard Dreyfuss, Linda Hamilton and Liv Tyler, with Dreyfuss a therapist working with an autistic child who witnessed the murder of his parents.

This double-bill of Imaginary Crimes and Silent Fall is the first time that either film has been on Blu-ray.  That’s two!

So, you’ve probably figured out by now that the “Three” in this Oct. 13 Blu-ray promotion from Mill Creek Entertainment is a triple-feature!!   And, you’ve probably already surmised that all three films in the collection are available for the first time on Blu-ray. 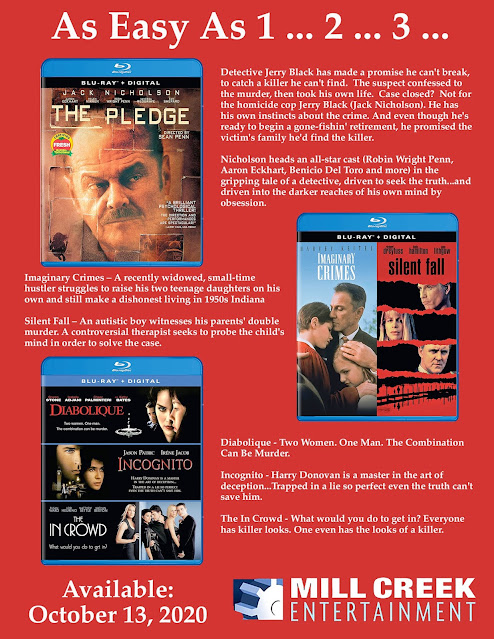