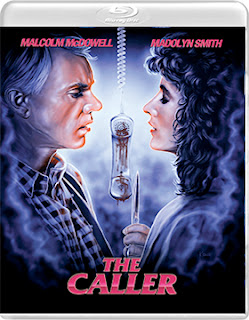 Heading the list is a new 2K restoration (from the film’s 35mm interpositive) of director Arthur Allan Seidelman’s 1987 mystery, The Caller, teaming Malcolm McDowell with Madolyn Smith (Urban Cowboy, 2010, All of Me).

This is a strange movie on two counts, the first is the storyline, which is simply weird (will get to that in a moment), the second is the film’s very odd production and distribution history.

Charles Band had some indie success in the 1970s with films like End of the World, Laserblast, Tourist Trap and then launched his own “studio,” Empire Pictures and delivered The Ghoulies, Re-Animator … and then he went on a production rampage that ended in financial disaster.   He learned his lesson from this and would later launch Full Moon Entertainment, which survives to this day (in various forms over the years).

In any case, it was during this “production rampage” that Band’s Empire Pictures produced The Caller, which was so odd that it opened as an arthouse picture at the Cannes Film Festival in May of 1987.   It followed this up with screenings at Mystfest in Italy the following month and then the financial collapse and things got weird.

Instead of finding a theatrical window for the film, it was licensed to Trans World Entertainment for a direct-to-video VHS release in 1989.   This restoration by Vinegar Syndrome paves the way for The Caller’s Blu-ray debut on Sept. 1. 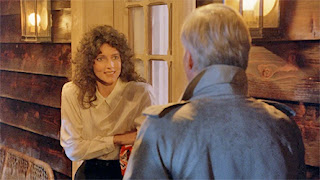 Now to the film itself.   “The Girl” (Smith) lives in a cabin in the woods.   “The Caller” (McDowell) shows up and claims that his car has broken down and he needs a little help.

One of them, either “The Girl” or “The Caller,” is a mouse and the other is a cat (metaphorically speaking) … and we know how that will play out.   The problem is, the two keep switching roles with their mind games … and the first thing you notice is that they seem know an awful lot about each other.   Not strangers, but have they done this before?   Hmmmm … odd.

They accuse each other of all sorts of things, she’s a killer, he’s a cop sent to investigate, but during their “cross-examinations” each blows gaping holes in the other’s story.   Intense, weird and suspenseful. 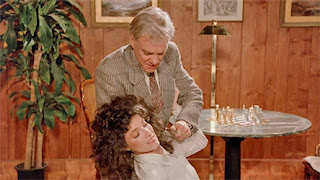 A mystery of sorts is playing out, but as the viewer it is tough to ferret-out exactly what the “real” game is … remember the 1972 film, Sleuth, with Michael Caine and Laurence Olivier going at other, that’s pretty much what The Caller is for most of its running time.   And then it shifts to the world of The Twilight Zone and The Outer Limits … now that was weird.

Bonus goodies include a video session with director Arthur Allan Seidelman (two-time Emmy nominee, with virtually all of his work in television … mini-series, series episodes, MOWs, etc.), which is titled “Boiling Over,” and an audio-only session with writer Michael Sloan.