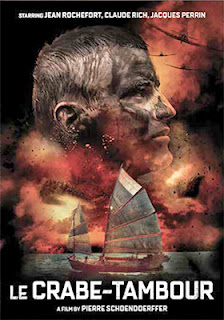 When Icarus Films announced the DVD release of Italian filmmaker Marco Bellocchio’s controversial 1986 uncut European theatrical presentation of Devil in the Flesh for delivery on June 8, we found that a bid out of the ordinary.   They’ve been focusing on more contemporary films from around the globe for domestic home entertainment consumption.   This seemed to be an outlier, but welcomed nevertheless.

And then came the stunning news that director Pierre Schoendoerffer’s 1965 French Indo-China war film, The 317th Platoon, had been unearthed, restored and would be making its domestic DVD debut on June 29.

Wow, that was two from the vault … you had to wonder if Icarus Films had found a source of vintage arthouse treasures, and would this be a regular feature in their release schedule?

It would appear that the answer to that question took place this past week when Icarus announced that July 27 will be the DVD debut date for Le Crabe-Tambour, director Pierre Schoendoerffer’s 1977 award-winning “sequel” to The 317th Platoon. 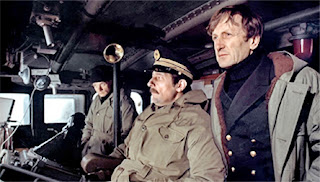 When we covered the announcement for The 317th Platoon we pointed out that Schoendoerffer had been with the French forces at the fall of Dien Bien Phu in the spring of 1954.   He was taken prisoner, spent four months in a prison camp and then made a film based on his experiences in Vietnam.   He even attracted major talent to star in his film.

After co-starring in The 317th Platoon as Lt. Willsdor, Bruno Cremer’s film career kicked into high gear with roles in René Clément’s epic Is Paris Burning?,  as Victor in director William Friedkin’s Sorcerer and more, but when asked to reprise his role for Schoendoerffer’s Le Crabe-Tambour he was all-in.

We find him now on board a French warship on the way to the French fishing fleet off the coast of Newfoundland carrying a load of supplies.   With him is the “Captain” ((Jean Rochefort — he would win Best Actor laurels at the 1978 César Awards, France’s equivalent to our Oscars for his performance here), who is, as we come to learn, dying.  Also on board are Pierre, the ship’s doctor (Claude Rich — 1992 César Awards-winner for Best Actor in director Édouard Molinaro’s Le Souper) and the ship’s chief engineer, played by Jacques Dufilho, who twice-won the Best Supporting Actor César Award (A Bad Son and here for his performance in Le Crabe-Tambour). 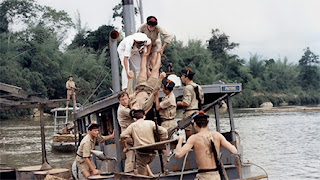 Without knowing anything about the film, you can see from just the credits alone that Le Crabe-Tambour is a big deal.   It was nominated for César Awards for Best Picture and Schoendoerffer for Best Director.  It is a big deal.

In any case, the ship and the time at sea provide the structure for the narrative of the story that unfolds in the form of flashbacks.   All four characters are long-serving member of the French military.   Through this narrative structure we learn of the Fall of France and the splintering of the military, the loss of French Indo-China at the battle of Dien Bien Phu and then the coup de grâce, the surrender of Algiers (for which Lt. Willsdor went to prison for opposing it).

Through these flashbacks we learn of the valor, the betrayals, and ultimately the honor achieved and preserved in serving in lost causes.   Le Crabe-Tambour is a bittersweet salute to the French military, especially to those who did their duty and tried their best.

Le Crabe-Tambour is presented in French with English subtitles. 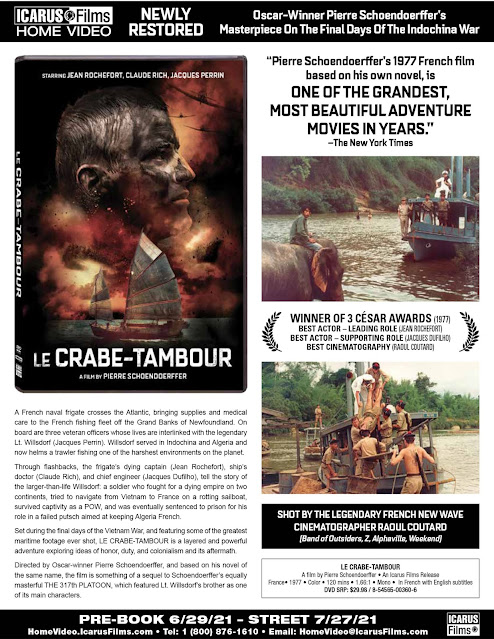