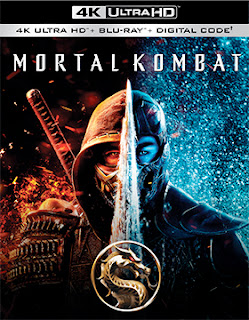 The domestic box office haul for this reboot of the Mortal Kombat film series was an impressive $41.3 million … the ARR comes in at a swift-to-market 81 days.

As to SKU configuration, there will be a 4K Ultra HD/Blu-ray Combo Pack and stand-alone editions for the Blu-ray and DVD formats.

As to bonus goodies, common to all SKUs are deleted scenes.  Exclusive to the 4K Ultra HD and Blu-ray product selections are five featurettes — “From Game to Screen: The Making of Mortal Kombat,” “Mortal Kombat: Fan Favorite Characters,” “Fight Koreography,” “Into the Krypt: Easter Eggs of Mortal Kombat” and “Anatomy of a Scene.”

For long-time fans of the Warner Archive Collection there is some frustration these days as we move into the third month of the studio’s new “Brand Store” arrangement with Amazon.com.   Maybe it is working out for them, who knows, but for fans of classic movies the home world of Warner Archives is shuttered and the new interface is clunky and frustrating. 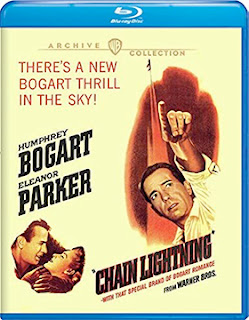 Topping the list is — and that is always a subjective opinion — is the June 22 Blu-ray debut of director Stuart Heisler’s 1950 film release of Chain Lightning, starring Humphrey Bogart, Raymond Massey and Eleanor Parker.

The dawn of the jet age is the backdrop for this test-pilot tale.   The skill and daring of former World War II pilots, such as Lt. Colonel Matthew Brennan (Bogart), would change the face of not only warfare, but commercial travel, so there was a lot at stake in getting it right.

It’s 1943, the Flying Fortresses are in the skies over Germany and Brennan is a pilot and can sense the “ticks” of the aircraft and knows that improvements can be made.   To this point, he brings Carl Troxell (played by actor-turned-director Richard Whorf — Chain Lightning would be his last feature film before turning his attention to television series direction … numerous episodes of Gunsmoke, My Three Sons, The Beverly Hillbillies, etc. and from his career move to was nominated twice for Emmy Awards before a heart attack took him at age 60), who is a designer, along on a mission to point out these suggestions.   This is, of course, foreshadowing. 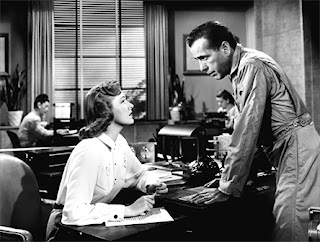 After the war, Brennan tries to make a go of it with his own flying business, but that didn’t work out, so he’s been hired as a test pilot by Leland Willis (Massey) and in one of those “isn’t this a small world” conveniences, Troxell works there, as does Brennan’s World War II love interest, nurse Jo Holloway (Eleanor Parker), who is now Willis’ assistant.

The core of the story, once the background and character introductions are in place, involves the testing of a new jet prototype and the very “buggy” safety systems that are being developed.   To prove the craft safe (after figuring out what was wrong with it), Bogart makes a daring non-stop flight from Nome, Alaska to Washington D.C. … edge-of-your-seat stuff!! 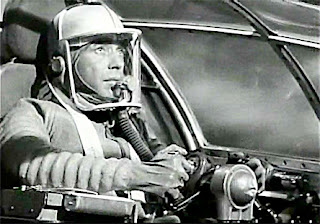 Chain Lightning would be Bogart’s last movie at Warner Bros., with the filming taking place between mid-April and July of 1949, but extensive post-production work (flying effects, etc.) delayed the film’s release from the Thanksgiving/Christmas season of 1949 to the end of February in 1950.   By the time the film was released theatrically, Bogart was hard at work as his newly-formed Santana Pictures.