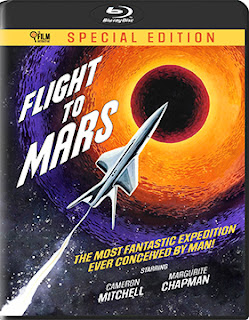 It’s 1950 and 1951, the atomic age has arrived, the rockets from World War II are being refined, quick-step advances in science and theatres were packed — before television began to dominate — and in this environment all one needed to do was to combine any or all of these elements together and you would be ready to go.

Voyages into space would be the obvious thing to do, not only in the real world, but on the silver screen as well.   And, if mankind could look to the stars, perhaps there were those from other worlds who might decide to pay a visit to Earth!!

In short order we had Rocketship X-M (June 1950), Destination Moon (also released in June of 1950), Man from Planet X (April 1951), Thing from Another World (June of 1951), When Worlds Collide (Aug. 1951), The Day the Earth Stood Still (Sept. 1951) and as we headed into the Thanksgiving holiday period of 1951 theatres nationwide welcomed director Lesley Selander’s Flight to Mars.

Word arrived this past week from The Film Detective that a new 4K restoration, (from the original 35mm Cinecolor separation negatives) will be landing at retail venues on July 20 as both DVD and Blu-ray product offerings. 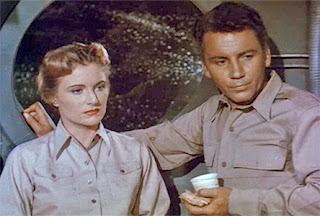 While the crew of the X-M landed on Mars quite by accident, the astronauts on their way to Mars in Flight to Mars have it all planned out.   Dr. Lane, a top physicist and the leader of the project, is played by veteran character actor John Litel (as Carson Drew in the Nancy Drew film series of the 1930s, plus such films as Dodge City, They Drive by Night, Cass Timberlane, Montana Belle, etc.).   He is joined by his assistant, Carol (Virginia Huston — Flamingo Road, The Racket), crew members Dr. Jim Barker (Arthur Franz — Sands of Iwo Jima, The Caine Mutiny, Monster on the Campus) and Prof. Jackson (Richard Gaines — Double Indemnity, Ace in the Hole, Francis in the Haunted House) and newspaper reporter Steve Abbott (Cameron Mitchell — Death of a Salesman, Pony Soldier, How to Marry a Millionaire), whose job it will be to write about the details of the flight and what they find on Mars. 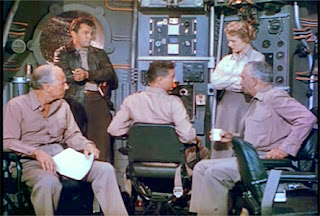 While the crew of X-M discovered life on Mars in the form of brute Neanderthal-like humanoids, Dr. Lane’s five-person crew crash-land on the planet (after a harrowing flight), only to discover that human-like creatures inhabit our nearest neighbor, and, as something of a bonus, speak English — they have been listening to our radio broadcasts and have deciphered our language.

No sooner have they arrived on Mars, when then they meet the kindly Ikron (Morris Ankrum — ironically, he also appeared in Rocketship X-M and would later star in Invaders from Mars, Earth vs. the Flying Saucers and Kronos) and his welcoming committee, who offer them help and refuge in their vast underground city.

This initial contact, while friendly, hides a more sinister plan.   Ikron wants to repair the Earthling’s ship, study it and make a fleet to invade Earth.  It seems that the power supply for their underground world is running out and they are doomed. 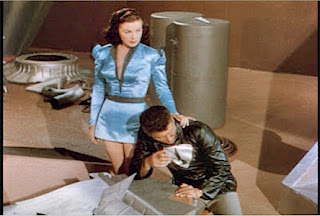 Meanwhile, Jim has taken up with an attractive Martian female by the name of Alita (Marguerite Chapman — Charlie Chan at the Wax Museum, Spy Smasher, The Green Promise), who tips the Earthlings off to Ikron’s plans!

Flight to Mars is a breezy and very entertaining sci-fi flick, with the promise of an inter-species relationship in the offing as the final credits roll. 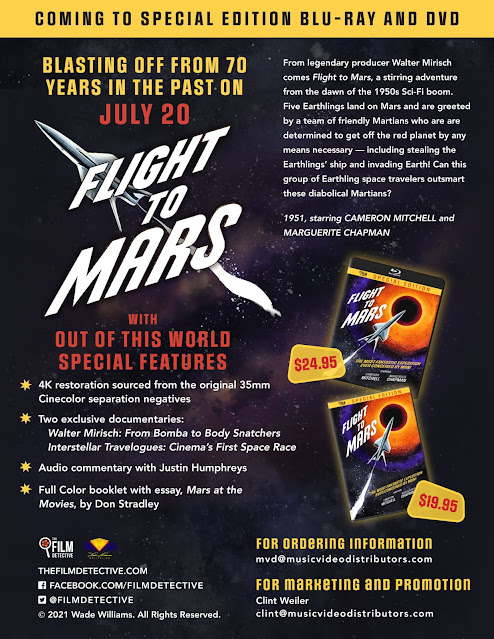 Email ThisBlogThis!Share to TwitterShare to FacebookShare to Pinterest
Labels: The Film Detective's 4K Film Restoration Of Director Lesley's Selander's Flight To Mars Ready For Blu-ray And DVD Release On July 20