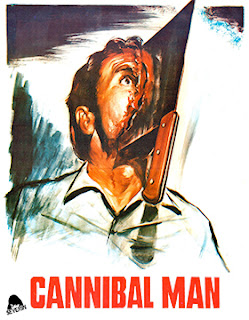 Severin Films, with sales and distribution expertise provided by MVD Entertainment Group, has newly prepared scans — from the original camera negatives — of both the original Spanish-language presentation as well as the English-dubbed international version of writer/director Eloy de la Iglesia’s Cannibal Man … the street date for both DVD and Blu-ray editions will be Aug. 24.

If you are not familiar with Iglesia’s film, your knee-jerk is that this must be a horror tale about some crazed lunatic that eats people.  It is titled “Cannibal Man,” but that’s only half right.

We meet Marcos (Vicente Parra), who has a certain skill; a profession, if you will.   He works in a meat-packing plant, he’s a butcher.   He makes a living, which may or may not be enough to please his “fiancé,” Paula (Emma Cohen — Cut-Throats Nine, Night of the Walking Dead).  Their relationship is showing signs of strain.

One evening after a night out, Marcos and Paula are enjoying a cab ride home when they start to get a little frisky.   Oh no, the cab driver is having none of that and tells Marcos to knock it off … he does, he knocks off the cab driver!!   Paula wants to do the right thing and go to the cops, after all, the cab driver started it and it was a fair fight. 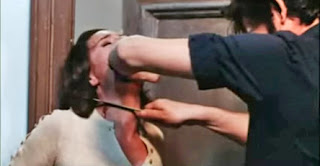 You can probably see where this is going.   Marcos snaps.  He gets Paula back home, has his way with her and kills her … no witness, no problem.   What to do with her body?   You can probably guess where that might be going too, but until the time is just right, he leaves her on the bed, soaked in her own blood.

It is at this point that Cannibal Man becomes off-the-rails bizarre as more and more of Marcos friends stop in to pay a visit … they stop in and join Paula.   Our boy Marcos becomes an unintended serial killer with a unique way of disposing of his victims.   Gulp!

Bonus features include, as mention, two-cuts of the film (no pun intended), the extended version titled Week of the Killer (which clocks in at 107 minutes) and the international version, The Cannibal Man (98 minutes).   There are also deleted scenes and two featurettes — “Cinema at the Margins” and “The Sleazy and the Strange.” 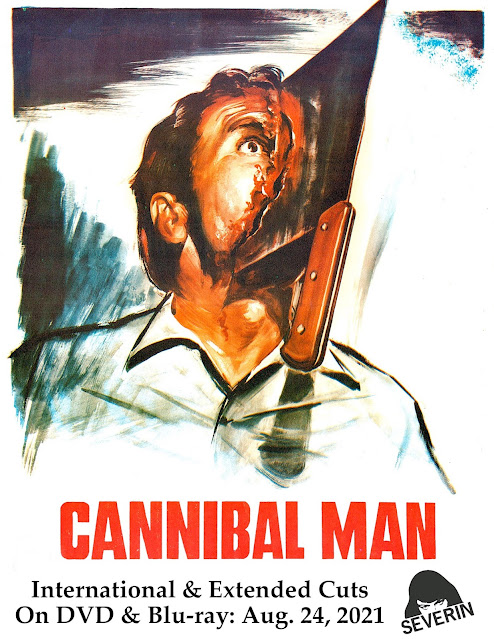