Ariztical Entertainment's Nov. 19 DVD Debut of Remington and the Curse of the Zombadings Update 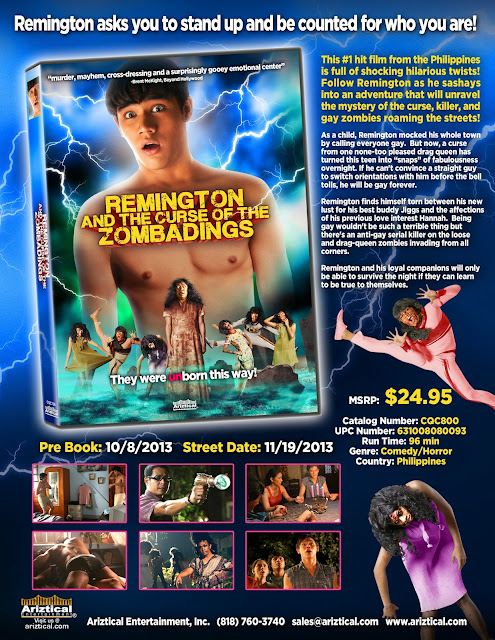 Serial killers!  Homophobe curses!  Gay zombies!  It can only be Remington and the Curse of the Zombadings, out Nov. 19 from Ariztical Entertainment.

This irreverent little ditty (Zombadings 1: Patayin sa Shokot si Remington) comes from the Philippines and follows ladies man Remington (Mart Escudero — Hide and Seek, My Monster Mom), who mocks a drag queen as a child and pays the price: 15 years later, the gay curse takes affect.  Remington has just hours to convince a straight man to switch sides, or he becomes gay forever.

Oh, and did we mention that there’s an anti-gay serial killer on the loose?  And that drag-queen zombies are invading?

This comedy was all the rage in the Philippines and as the original title suggests, more gay-zombie/homophobe serial killer/drag queen curses could be in our near future.   Ariztical Entertainment may have latched onto a franchise in the making here!
Posted by DVD & Blu-ray Release Report at 8:58 AM

Email ThisBlogThis!Share to TwitterShare to FacebookShare to Pinterest
Labels: Ariztical Entertainment's Nov. 19 DVD Debut of Remington and the Curse of the Zombadings Update, DVD and Blu-ray Release Report