Mischief Night On DVD From Image Entertainment On Dec. 17 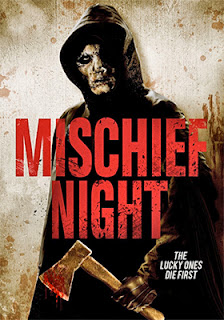 Image Entertainment has a “talk-to-the-screen” thriller planned for a DVD rollout on Dec. 17.   That would be director Richard Schenkman’s Mischief Night.

If a filmmaker does it just right and keeps the suspense building — without padding — you can literally have the audience start offering advice … “No, no, don’t go in there.”  “Look behind you!!”  “Run!!!”   That’s what Mischief Night is … a “talk-to-the-screen” thriller.

For film buffs the references to Wait Until Dark abound.   For those unfamiliar with that film, back in 1967 filmmaker Terence Young crafted a nifty thriller that starred Audrey Hepburn as a blind woman being terrorized by a trio of drug dealers and murderers (Alan Arkin, Richard Crenna and Jack Weston).   She must somehow overcome their brutality — despite her obvious disadvantage — in the confines of her apartment if she is to survive.

With Mischief Night, we are introduced to Emily (Noell Coet — as Beth in the Revelation Road film series), who has gone blind after a traumatic event in her life and finds herself recovering from the ordeal in a large Victorian-style home owned by her father.   On the eve of Halloween (for atmosphere), there is a mysterious intruder who breaks into her home and begins stalking her — we have not a clue as to what this is all about and since she cannot see, she’s oblivious to his presence (but we “see” everything). 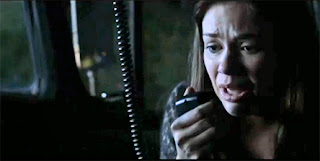 So as Emily moves about the house, the masked and hooded figure begins to pick off family members and friends, while Emily is, initially, unaware of the danger that lurks, often, just outside the hallway door.   The trick here is to keep the suspense building until the final act and both the motives are revealed and the survival instincts of our heroine are put to the ultimate test  … it is all nicely done!   You will find yourself, yelling “Emily, look out!”

A behind the scenes production featurette is the only bonus nugget at this time.