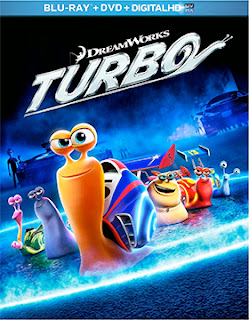 The ARR works out to 116 days and ticket sales at the local multiplex this past summer were $81.1 million.

The Blu-ray/DVD Combo Pack and 3D/2D Deluxe Edition will come with a “Smoove Move’s Music Maker” feature, “Meet Tito,” “The Race,” “Shell Creator,” “Champions Corner,” “Be An Artist!” and “Team Turbo: Tricked Out” featurettes, along with a trailer for the “Turbo F.A.S.T” TV series (debuting this December), sneak peaks of available DreamWorks Animation films and music videos from DreamWorks films.