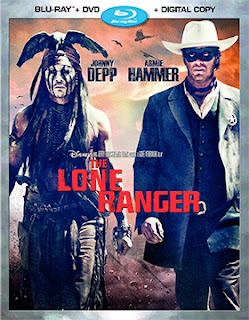 Walt Disney Studios Home Entertainment has chosen the week before Christmas (Dec. 17) to street The Lone Ranger (the ARR is 165 days and the box office tally was $89 million) on both DVD and as a Blu-ray/DVD Combo Pack.

Much maligned for its box office performance (and bloated budget), The Lone Ranger has yet to be seen by all that many people, thus a home entertainment push just in time for Christmas offers the studio an opportunity to remedy that.  There are too many cool things in this movie to pass up: non-stop action, train rescues, gun battles and Johnny Depp as Tonto (well, you be the judge on that one).

Disney packs the Blu-ray with tons of bonuses, including “Riding The Rails Of The Lone Ranger,” detailing the creation of a railroad track for the film; “Armies’s Western Road Trip,” which sees Armie Hammer (The Lone Ranger) guiding viewers on a tour of the locations; and “Becoming A Cowboy,” which shows how the cast was trained to shoot and ride; plus more.