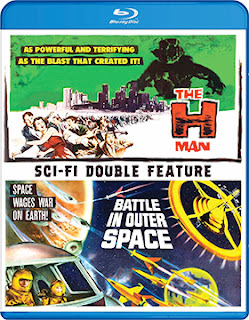 Genre fans and film buffs will be singing a happy tune with the double-disc Blu-ray release of Sci-Fi Double Feature, which features two classics from Japanese director Ishirô Honda.

The first is the June of 1958 Japanese version of The H-Man, which arrived domestically the following June (English dubbed) as a double-feature from Columbia Pictures (it was billed with director Charles Saunders’ The Woman Eater).   Mill Creek Entertainment is providing fans with both viewing options for The H-Man, both the original Japanese edition and the English-language dubbed presentation.

The H-Man is a sci-fi tale that serves as a warning to mankind.  We observe strange creatures consuming humans by liquefying them.   Pretty gruesome stuff and during the course of the action, which involves drug dealers, the police and a lovely night club singer by the name of Arai (Yumi Shirakawa — who was familiar to American audiences after appearing in both Rodan and The Mysterians), we learn that these “H-Men” are the product of hydrogen bomb testing!!

Teamed with The H-Man is director Ishirô Honda’s Battle in Outer Space, which was released theatrically in the United States in July of 1960 as a double-feature that was teamed with director David Bradley’s 12 to the Moon.

In the future — 1965 — a series of disasters strike the Earth, including the mysterious destruction of an international space station.   The Space Research Center traces these attacks to the moon and an alien invasion force called the Natals.   An all-out battle follows between the Earth’s defense forces and the invading Natal flying saucers … will they succeed?

The other Blu-ray double feature heading home from Mill Creek Entertainment is the White Crane Chronicles, which showcases the martial arts discipline of David Carradine — in Shanghai on the eve of the Japanese invasion of China — in the two-part feature film presentation of director Philip Spink’s Kung Fu Killer and Kung Fu Killer II.   Daryl Hannah co-stars. 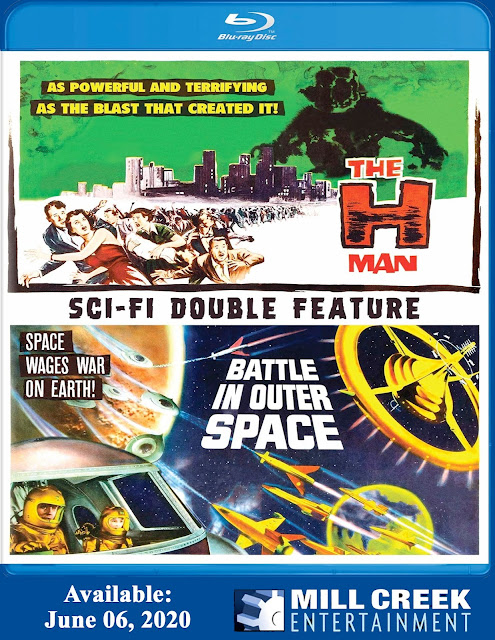