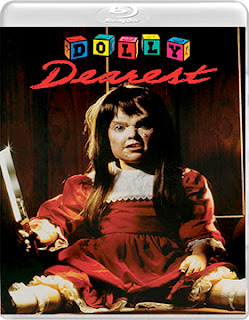 Vinegar Syndrome announced its latest slate of film restorations this past week.   The street date for these new Blu-ray product offerings will be Apr. 28.

Leading the charge is a new 2K film restoration (from the 35mm interpositive) of director Maria Lease’s 1991 horror, with humor, gem, Dolly Dearest … first time on Blu-ray (being released as a Blu-ray/DVD Combo Pack).

Starring Denise Crosby and Sam Bottoms, we first pick up the action when Elliot Wade (Sam Bottoms) takes ownership of the Dolly Dearest Toy Factory in Mexico, which is conveniently located next to an ancient Mayan archaeological site.

Sure enough, the site is defiled and the demon Sanzia is unleashed and takes up residence in one of the factory’s dolls (think: Chucky … a bit of trivia, the stunt man for the original Child’s Play, Ed Gale, who was also Howard the Duck, is costumed as the Dolly Dearest doll in the live-action scenes). 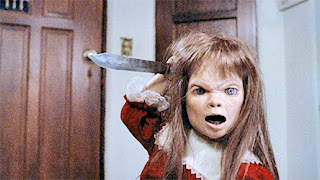 Elliot and his wife, Marilyn (Denise Cosby), along with their children move into a house nearby, visit the factory (which is closed) and little Jessica (Candace Hutson — perhaps best known as Molly in the Evening Shade TV series) asks if she can have one of the dolls to take with her … eeny, meeny, miny, moe, you guessed it, she picks the Sanzia-possessed Dolly Dearest doll.

People die, Jessica becomes possessed and archaeologist Karl Resnick (played by Rip Torn) fills us in on the backstory of the evil Sanzia.   More people die, an army of Dolly Dearest dolls arise and things for the Wade family look bleak!! 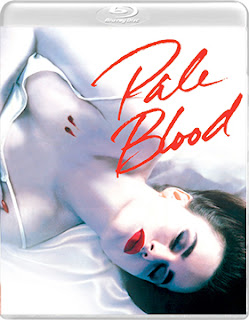 If filmmaker Maria Lease hadn’t injected some pretty funny moments into Dolly Dearest, the film would have been just another Child’s Play rip-off, and that’s why this horror tale is so much fun … and why it works.

Bonus features include a pair of featurettes — “Playing with Dolls” and “Dressing the Part.”
Also on the Apr. 28 film restoration release calendar from Vinegar Syndrome are a new 2K restoration (from the 35mm interpositive) of director V.V. Dachin Hsu’s 1990 good-guy vampire tale, Pale Blood (Blu-ray/DVD Combo Pack), starring George Charkiris, Wings Hauser and Pamela Ludwig; a 2K restoration of director Mario Azzopardi’s 1980 (maybe 1979) unhinged writer tale, Deadline (Blu-ray/DVD Combo Pack), teaming Stephen Young with Sharon Masters, and the three-film collection titled Forgotten Gialli: Volume One (Blu-ray only … included are: Trauma, Killer is One of 13 and The Police are Blundering in the Dark).