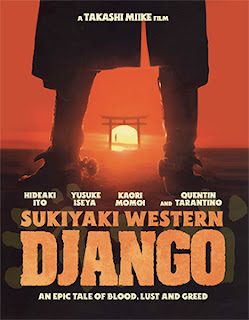 There was some terrific news coming from MVD Entertainment Group this past week regarding their latest candidate for inclusion in the company’s popular Marquee Collection.   A great choice for release on DVD and Blu-ray on June 16 is none other than Japanese auteur filmmaker Takashi Miike’s 2007 Spaghetti Western homage, Sukiyaki Western Django.

Let’s get the details about the DVD edition out of the way first.   MVD is making available the 98-minute domestic theatrical cut available for the bargain price of just $14.95.   This edition of Sukiyaki Western Django includes a 57-minute making-of featurette (presented in Japanese with English subtitles), deleted scenes and a sizzle reel.

The tug of war over the services of “The Gunman” (Hideaki Ito — Terra Formars, Wood Job!) between the Heike Clan’s Kiyomori (Kōichi Satō) and the Genji Clan’s Yoshitsune (Yūsuke Iseya) arrives on Blu-ray as a Collector’s Edition.

Bonus features begin with an extended cut of Sukiyaki Western Django that clocks in at roughly 160 minutes.   The same aforementioned bonus features that are included on the DVD buying option are also included here.

This Spaghetti Western, with a Samurai twist, also stars Kaori Momoi as the mysterious Ruriko, Yoshino Kimura as the fatefully doomed prostitute, Shizuka, and Quentin Tarantino does a nice turn as the local medicine man, Piripero. 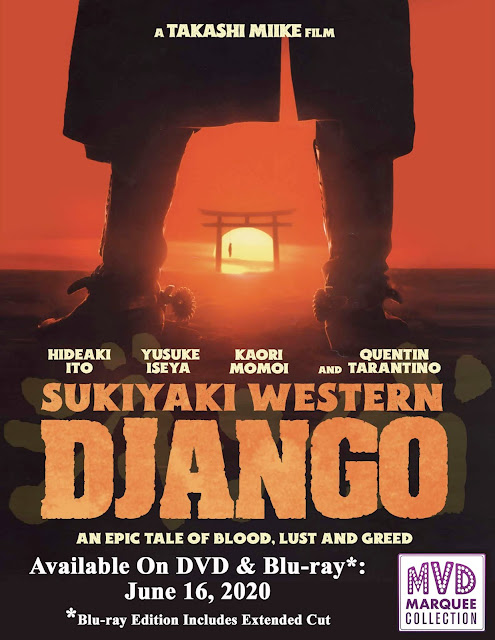