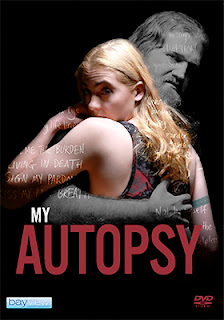 You would think that the script would have found some backers, gone into production and would have long-since been released on DVD.   Didn’t happen, and in retrospect that was not a bad thing as Mollohan honed her film filmmaking skills with directing, editing and producing numerous short films and music videos for Byzantine and Voices of Anatole.

She learned the craft, and with indie financing produced, directed and edited My Autopsy.  Yes, it took a decade from inception to release, but the wait is well worth it.

Rachel (Gareth Tidball), just 24-years old, is in a dark, abusive relationship with the charismatic Vince (Dave Stishan), a local musician.   He can be sweet, sensual and loving one minute and the next brutal, manipulative and cruel.   It’s a cycle that seems to have no end.

She does work up the courage to walk away, but just being physically separated from Vince is a start, but as she learns, it is just a start.   He loves to play “mind games” with her.   She is, after all, his “property.”   The mental abuse, as she discovers, is every bit, if not more so, destructive as the physical assaults.

What filmmaker Holly Mollohan has crafted, with My Autopsy, is an intense look at the trauma of an abusive relationship and what it takes, physically and emotionally, to finally break free.   The movie is a rollercoaster ride of emotions, blessed with top-of-the-line production values and a solid soundtrack … and, of course, more festival awards were garnered for the finished film, including Best Feature Film at the 2020 GenreBlast Film Festival (you would expect nothing less).

Feb. 23, on DVD, My Autopsy from Bayview Entertainment.   Mark it down. 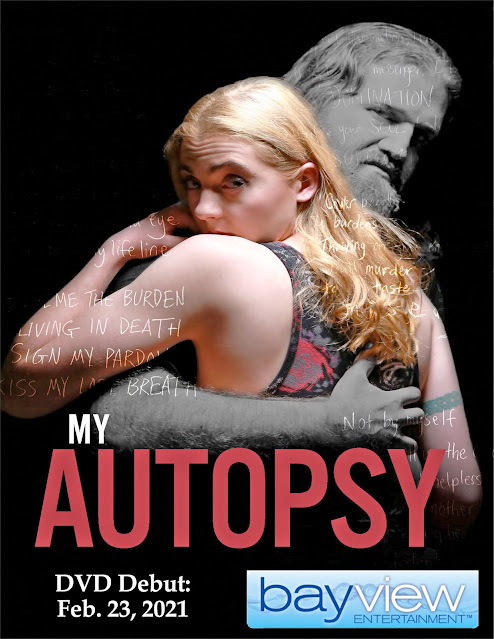 Email ThisBlogThis!Share to TwitterShare to FacebookShare to Pinterest
Labels: Bayview Entertainment Sets Feb. 23 For The DVD Debut Of Writer/Director Holly Mollohan's My Autopsy