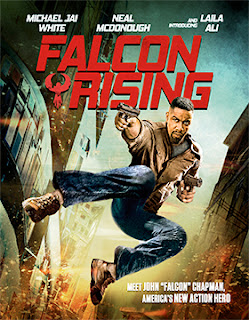 MVD Entertainment Group announced this past week its latest edition to its popular Marquee Collection line of Blu-ray products.   This will be the Mar. 30 Blu-ray debut of director Ernie Barbarash’s 2014 thriller, Falcon Rising.

When the film opens, your first thought is that this is going to be a very short film.   The protagonist, John Chapman (Michael Jai White — Spawn, Breakfast of Champions, Universal Soldier: The Return, The Dark Knight, etc.), who is known to friends as Falcon, is about to blow his brains out by playing Russian roulette all by himself.   How many spins of the chamber before the magic bullet puts an end to his misery?

Bored with the process, Falcon leaves his filthy New York City apartment and wanders down to the local bodega, which is in the process of being robbed by some gangbanger.   Suicide by gangbanger, that’s the ticket, but when the little thug hesitates, Falcon takes him down and that puts the end to both the robbery and his momentary thought of suicide. 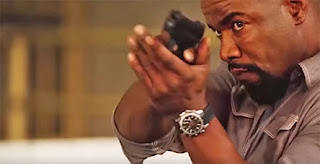 Word arrives that his sister, Cindy (Laila Ali), has been beaten to an inch of her life in the slums of Rio de Janeiro.   She’s a do-gooder, who crossed paths with someone who didn’t particularly care for her working with the locals.

Falcon, who we learn is a highly-skilled Marine combat veteran, jets down to Rio, hooks up with his war buddy, Manny (Neal McDonough — Captain America: The First Avenger, Flags of Our Fathers, Minority Report, etc.), who works in the American embassy.   He warns him to be careful of the local slum lords.   So too does Tiago Santo (Jimmy Navarro), the detective assigned to investigate Cindy’s beating.

It all becomes clear at the hospital.   There is an attempt to murder the comatose Cindy and Falcon puts two and two together and comes up with the yakuza as the gangsters responsible for her beating and attempted murder.   They are running drugs and engaged in human trafficking in Rio’s notorious slums!!  It’s all-out war as Falcon cuts a swath through the yakuza … who’s in charge?   He’ll find out — there’s no stopping the Falcon, he is a force of nature — but he had better watch his back in the process!!

Falcon Rising, on Blu-ray from MVD Entertainment Group on Mar. 30 as the newest installment in the company’s Marquee Collection.   Perfect!! 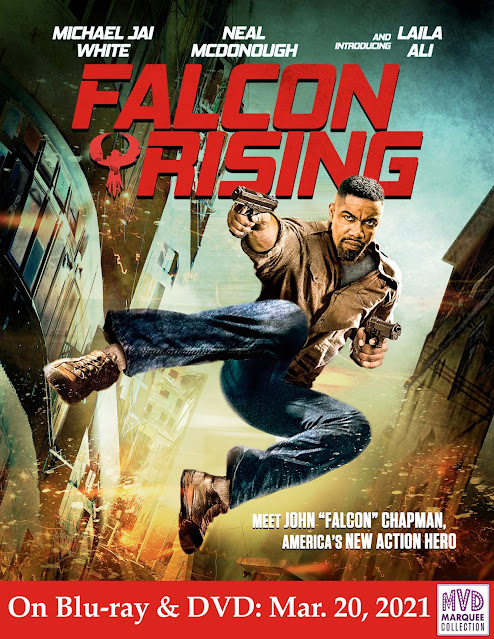