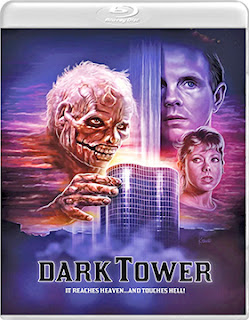 Just before the home entertainment industry shutdown for the Christmas and New Year’s holiday period, Vinegar Syndrome announced that they had tabbed Jan. 26 for a new 4K restoration of director Vernon Zimmerman’s 1980 horror cult classic, Fade to Black.

That was pretty exciting news as the Blu-ray release comes loaded with bonus goodies, including commentary from the film’s star, Dennis Christopher.  This past week Vinegar Syndrome expanded their Jan. 26 Blu-ray release calendar to include four additional film restorations.

What is heading home for genre fans to savor in late January?   Of course, it is always a subjective evaluation as to what is leading any particular release parade, but you’d have to lean towards the directing team of Freddie Francis and Ken Wiederhorn’s 1988 high rise “haunted house” thriller, Dark Tower, simply because it co-stars Walkabout’s Jenny Agutter.

This is a new 2K restoration from the 35mm interpositive.

So, what is the iconic Jessica from Logan’s Run up to in Dark Tower?   After a quick introduction as part of the management team of a newly completed high rise in Barcelona, Carolyn Page (Agutter), gives a little tour, hands out some souvenir hard hats to the VIP guests and then heads back to her office and takes a little personal downtime.

That means disrobing and enjoying the moment with next to nothing on.   The window washer, who just happens to be working on that particular floor, takes notice, she takes notice of his voyeurism and moments later he dies a horrible death.   Accident? 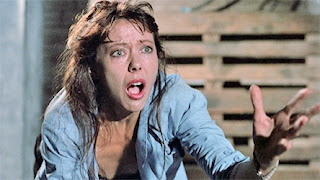 Dennis Randall (Michael Moriarty — Q: The Winged Serpent, Pale Rider, etc. … and four-time Emmy-nominee for his Benjamin Stone character in Law & Order) is called in to investigate.   Carolyn claims it was some sort of ghost.   Sure, that is as good as an explanation as any, but he is still going to investigate ... and fantasize what he could do the lovely witness if given the opportunity.

Turns out the place is haunted … and we discover, in something of a twist-ending, who is actually haunting the place and why the lovely Carolyn Page is the target of this deadly aberration.

The only bonus feature is the video session with f/x and makeup artist Steve Neill (Battle Beyond the Stars, Star Trek VI: The Undiscovered Country, The Stuff, etc.) titled “Dark Inspirations.”