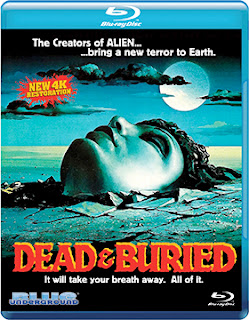 Blue Underground, with sales and distribution expertise provided by MVD Entertainment Group, has a new 4K film restoration of director Gary A, Sherman’s 1981 horror chiller, Dead & Buried, ready for genre fans to enjoy as either DVD or Blu-ray product offerings on Feb. 22.

It was 1979 and Ronald Shusett was busy with Alien, which he had started working on with Dan O’Bannon in 1975, it would end up being a blockbuster, not only for these two newbies, but for director Ridley Scott and actors Sigourney Weaver, Tom Skerritt, John Hurt, Ian Holm, Harry Dean Stanton and more.  It was during this time that an opportunity to work on another project fell into their laps.

A story idea had been snapped up by fellow producer Robert Fentress, who didn’t know quite what to do next, but he did manage to hook up with Shusett, who was just as green as he was (of course that would soon change).   Where the money was coming from to actually produced the film was influx … but somehow it would all eventually come together, especially when the “money people” where able to leverage the success of Alien.

In early 1980 production got underway in Mendocino, California, with Stan Winston on board for the makeup effects, with Gary A. Sherman as director. 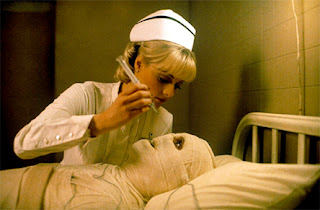 Welcome to the beach community of Potters Bluff, where strange is the operative word.   We just jump right in with an amateur photographer by the name of George (Christopher Allport) meeting an attractive young woman, whom he calls Lisa (Lisa Blunt … her next film would be An Officer and a Gentleman) and to his surprise and delight she offers to pose for him on the beach (and more).

Pretty soon people from the town begin to show up on the beach and “strange” kicks in as George is beaten and set ablaze.

The next citizen of Potters Bluff we meet is the sheriff, Dan Gillis (played by James Farentino, who had just finished The Final Countdown), who discovers George’s crispy-fried body in a car wreck, and calls in the coroner, William C. Dobbs (Jack Albertson), to process the body … but up jumps George, he’s not dead.

Not to worry, the nurse at the hospital (who looks suspiciously like the girl on the beach) makes quick work of him.   Dead now.

Meanwhile, as the sheriff investigates, we see many of the townspeople who were responsible for the assault on George … what the hell is going on?    A town full of murdering maniacs, who lead seemingly normal lives?   Included among these is the sheriff’s wife, Janet (Melody Anderson — as Dale Arden in Flash Gordon) 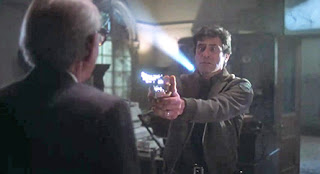 Wait a second, isn’t the new guy running the gas station, Freddie, the spitting image of the now dead George?   Like we said, what the hell is going on in Potters Bluff?   The body count will mount … visit Potters Bluff and you will not live long!!

Of course, genre fans know what the MacGuffin is.   Let’s just say that the kindly Dobbs is not what he seems to be … neither are the people of the town.

Bonus goodies include a whopping four commentary options.   One with director Gary A. Sherman, a second with writer/producer Ronald Shusett and actress Linda Turley (aka: Mrs. Shusett), number three features the director of photography Steven Poster and the final one teams film historian Troy Howarth and Nathaniel Thompson.

There are also seven featurettes — “Behind the Scenes of Dead & Buried,” “Dead & Buried Locations: Now and Then,” “Murders, Mystery and Music,” “The Pages of Potters Bluff,” “Stan Winston’s Dead & Buried,” “Robert Englund: An Early Work of Horror” and “Dan O’Bannon: Crafting Fear.” 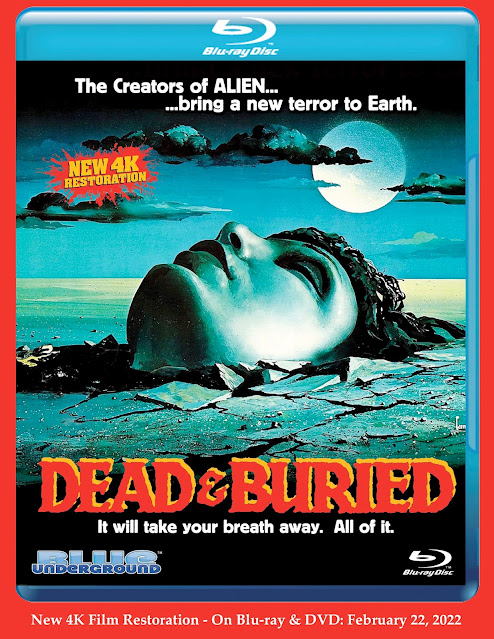