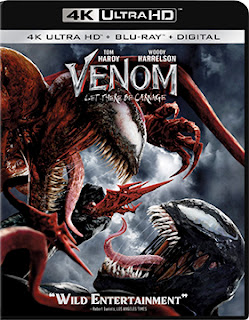 The ARR comes in at 74 days and domestic box office receipts are a stellar $202.6 million.

Planned for distribution are Combo Pack editions for the 4K Ultra HD (with Blu-ray) and Blu-ray (with DVD) formats, plus a stand-alone DVD purchasing option.

The first Venom, directed by Ruben Fleischer and starring Tom Hardy, Michelle Williams and Woody Harrelson (uncredited as “Red,” aka: Cletus Kasady), pulled in a pre-pandemic $213.5 million, so with Hardy, Williams and Harrelson reprising their roles in this sequel, and, seeing the box office haul, there is hope on the horizon that people are returning to theatres at last.

Bonus features, which are limited to the Combo Pack editions, included outtakes, a blooper reel, six deleted scenes and a quartet of featurettes — “Eddie & Venom: The Odd Couple,” ”Sick and Twisted Cletus Kasady,” “Concept to Carnage” and “Let There be … Action.”