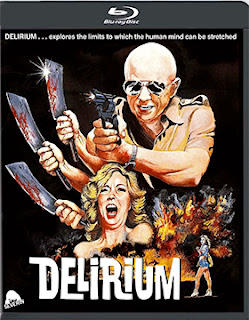 There are still films out there with a following that have yet to move beyond VHS.   DVD has been around since 1997 and yet some genre-fan treasures remain MIA.   Sad, very sad.

On Jan. 25 you can take one of these missing treasures off of the list courtesy of Severin Films.

With sales and distribution expertise provided by MVD Entertainment Group, writer/director Peter Maris’ 1980 crazed serial killer thriller, Delirium, will not only be making its DVD debut in late January, but Severin Films is also releasing the film on Blu-ray as well.

It was Peter Maris first film, shot in and around St. Louis, Missouri beginning in June of 1978, it would be “in the can” (finished and ready for distribution) by late November.   As is often the case with indie productions, finding theatrical distribution can be a challenge.

To accomplish that, Maris previewed the film in St. Louis in July of 1979 and that appears to have done the trick as Osyssey Pictures picked it up and took Delirium out regionally in 1980, opening in the Los Angeles market in November of 1980. 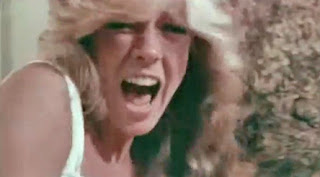 About this time there was something earth-shaking taking place in the world of viewing options … that would be the arrival of the VCR.   Suddenly movies could be viewed in the comfort of your home and that’s where Delirium surfaced next, on VHS in the mid-1980s.   And that was it.   Until now!!

Charlie Gunther (Nick Panouzis) and his buddy, Eric Stern (Barron Winchester), have stumbled into a pretty interesting business opportunity.   They are Vietnam vets and have been recruited by a local group of businessmen to clean up the streets.   Kill the criminal element at your pleasure.   This thug is causing trouble, on the kill list he goes … and the next stop is the corpse of the trouble-maker being tossed into the mighty Mississippi! 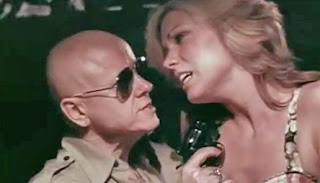 There is just one little problem with this win-win situation, and that is Charlie.   He starts having flashbacks to his combat days in Vietnam and gets it in his crazed brain that the enemy is everywhere.  He becomes a serial killer and the police are having a difficult time “nailing” down the suspect in an ever-grown string of random killings.

What makes the film especially interesting is that it is graphic before graphic was the rage.   And, let’s be honest, Maris (Terror Squad, Viper, The Killer Inside, Alien Species, Zombie Hunters, etc.) did this on a shoestring and some of the “backstory” (flashbacks to Vietnam) elements are a little cheezy.   The main story, however, works like a charm.

First time on either DVD or Blu-ray, which means for a generation of horror fans, this is virtually unseen.   Bonus features are two featurettes — “Directing Deliriium” and “Monster is Man.” 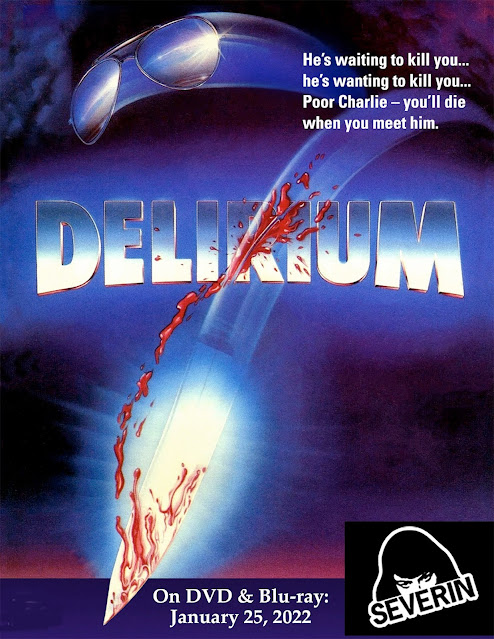