No Time To Die From Universl Pictures Home Entertainment On Dec. 21 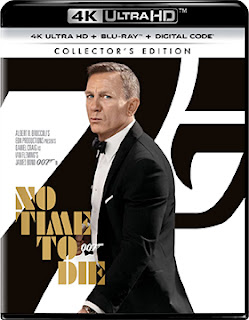 Universal Pictures Home Entertainment will be teaming up with MGM on Dec. 21 for the three-SKU launch of the fifth and final film starring Daniel Craig as Ian Flemming’s 007, James Bond, in out-of-his-depth director Cary Joji Fukunaga’s No Time to Die.

It seemingly took forever for this Bond film to see the light of day.   First it was Danny Boyle as the director back in early 2018.   That blew up.   Then the pandemic and delay after delay, but finally James Bond was back in theatres on October 8 and not in the more lucrative Christmas-season release window.

But not to worry, the domestic box office haul has grown to $150.4 million, which is still impressive when you factor in the relentless media and government promotion of Covid as a thing of terror.

For the record, the ARR works out to a swift-to-market 74 days (to make a Christmas-season retail date).

Planned for release are Combo Pack selections for both the 4K Ultra HD (with Blu-ray) and Blu-ray (with DVD) formats, plus a stand-alone DVD edition.

Bonus goodies are five featurettes — “Anatomy of a Scene: Matera,” “Keeping it Real: The Action of No Time to Die,” “A Global Journey,” “Designing Bond” and “Being James Bond.”

Email ThisBlogThis!Share to TwitterShare to FacebookShare to Pinterest
Labels: No Time To Die From Universl Pictures Home Entertainment On Dec. 21