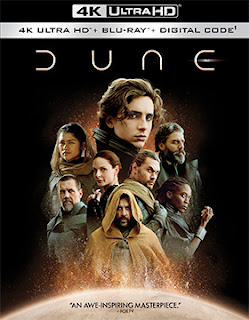 The ARR calculates out to 81 days and domestic box office receipts currently stand at $93.2 million.

Planned for distribution in early January are Combo Pack editions for both the Blu-ray (with DVD) and 4K Ultra HD (with Blu-ray) formats, plus there will be a stand-alone DVD SKU.

The bonus feature common to all home entertainment package media release configurations is the four-part featurette titled “The Royal Houses.”

Email ThisBlogThis!Share to TwitterShare to FacebookShare to Pinterest
Labels: Warner Bros. Home Entertainment Tabs Jan. 11 For The Launch Of Dune