Preliminary format release results for 2019 show increases in SKU counts for both DVD and Blu-ray, while the 4K Ultra HD number remained as nothing more than a studio high-profile theatrical release blip.

It should be noted that the DVD count will rise slightly in the weeks ahead as stranglers are tracked down and posted.   The Blu-ray number is pretty close to the market and the 4K Ultra HD count is firm. 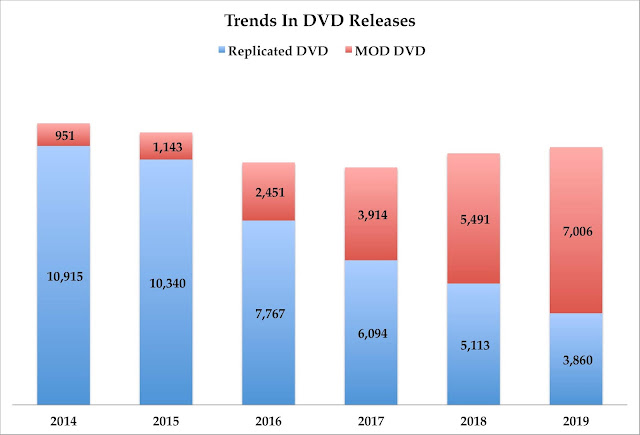 The MOD/replicated ratio flipped in 2018 for the first time when MOD releases outpaced traditionally replicated DVD product offerings by 51.8 percent to 48.2 percent (5,491 versus 5,112).

We fully expect this trend to continue as MOD publishing for DVD products will continue to mirror the book publishing business for soft-cover books (especially from Amazon.com).   48-hour turn-around will become the norm for the majority of titles released on DVD in the coming years … cheap, simple and effective.

It is also a pirate’s paradise as the studios seem content to let “deep catalog” offenses slide.
The big growth area for the DVD format is Sports on-demand, with the CBS Sports Digital Network leading the way in publishing high school sporting events nationwide on an on-demand basis.   We expect this trend to include increases in both college-level and professional sporting events in the near future.

Of note, Coplay, Pennsylvania’s Smart Mark Video delivers a weekly slate of new DVD and Blu-ray on-demand releases to fans of the professional wrestling market (non-WWE).   It would not come as a surprise if other niche sporting events were to develop similar publishing venues … again, cheap, simple and effective.

Other on-demand categories that fuel the annual count of DVD new product choices are Religion, Foreign Language movies and Special Interest, plus recycled Theatrical library titles by “non-traditional” sources, many of which are currently owned by the “Hollywood” studios (no one seems to be monitoring this any longer).

It would not come as a surprise if the current streaming wars ultimately became a rich source of programming for the on-demand packaged media marketplace.   Bloomberg reported this past week that a whopping 535 new television programs were released in 2019 … that’s ten new shows per week.   Some on network, some on cable and the bulk as streaming choices.    Just ball-parking the numbers, ten episodes per show, one hour per episode … that’s something on the order of 5,000 hours annually of episodic programming from just new productions alone.   Hello!!

Slow to pick up on the trend in on-demand publishing is the music industry, which could be churning out “keep sake” editions of concerts — both current and vintage — on an on-demand basis (someone will pick up on this … of this we are sure).   Fathom Events, with their rich selection of operas and other musical events, while popular with theatre-goers, seem to have missed this “keep sake” market as well (at least for the moment).

On the Blu-ray front, SKU count exceeded 3,000 new releases for the first time in the history of the format this past year.   The preliminary number stands at 3,027, an increase of 7.53 percent over the 2018 Blu-ray release total of 2,815 new titles. 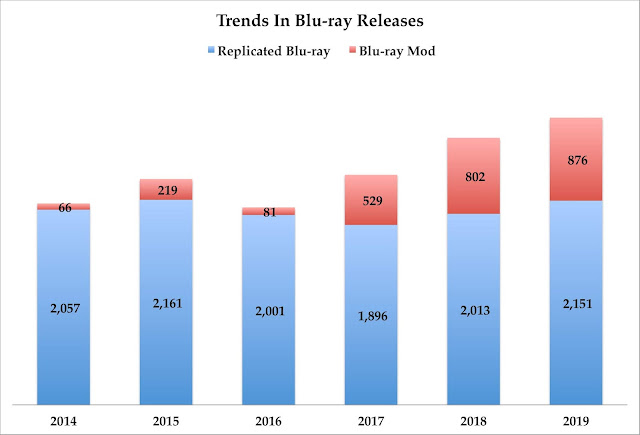 The ratio between traditional replication and MOD for the Blu-ray format remains remarkably stable — 71.5/28.5 percent in 2018 versus 71.1/28.9 percent in 2019 (Blu-ray is the workhorse for the studios at this point, so that ratio should remain about same for 2020).

Overall, combined new SKU counts for the three formats currently stands at 14,063 for 2019 (that will continue to move upward in the next few weeks as revisions are made).   Last year the number came home at 13,598, which marks an overall increase of 3.4 percent in home entertainment packaged media output on a year-over-year basis.

The overall ratio of traditional replication versus MOD publishing — for the combined three formats — is now flipped in favor of on-demand publishing for the first time.   56 percent of all new releases were on-demand (7,882), while 44 percent were from traditional manufacturing (6,181) … the previous year (2018), the on-demand percent was 46.3 percent (6,293), while traditional sources contributed 53.7 percent (7,305).

The trend is unmistakable … it would not come as a surprise if the overall record of 15,227 new releases achieved in 2006 is soon eclipsed … on-demand publishing, coupled with new product sources will make this so.