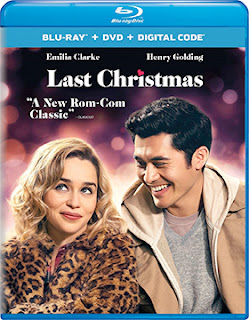 Universal Pictures Home Entertainment was busy as 2020 begins with a parade of new announcements for recent theatrical releases making their way to the home entertainment packaged media marketplace during the first quarter.   So let’s get to it.

First up, arriving home on Feb. 4 is director Paul Feig’s Last Christmas, which was inspired by the 1984 Wham! recording of the same name … the song has resurfaced on the Billboard Charts annually since 2007.   Emma Thompson, co-wrote the script with her husband, Greg Wise … she also produced.

Last Christmas arrives with an ARR of 88 days and the Thanksgiving period theatrical run pulled in $35.1 million in ticket sales and another $85 million overseas.

Planned for release are a stand-alone DVD edition and a Blu-ray/DVD Combo Pack.
As to bonus goodies, there are two commentary options … one featuring actor-turned-director Paul Feig (Bridesmaids, The Heat) and a second with Feig and producer/writer/actor Emma Thompson. 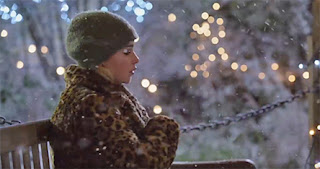 Additionally, there are both alternate ending and alternate opening sequences, plus a blooper reel, deleted, extended and alternate scenes, a music video presentation of “Last Christmas” and a whopping nine featurettes — “Director in Vision,” “It's All So Cold,” “Try Not to Laugh,” “A Legacy Revealed,” “Pure Golding,” “Emilia Recording Session,” “Love Letter to London,” “Santa and Her Elf,” “Paul Feig Takes Over the Tram” and “12 Days of Production.” 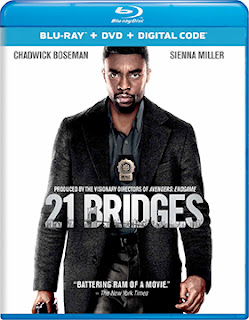 That mid-February street date for both DVD and Blu-ray/DVD Combo Pack presentations of 21 Bridges works out to just 88 days … box office receipts came in at $28.3 million.
As to bonus features, director Brian Kirk (Middletown) provides commentary and there are deleted scenes. 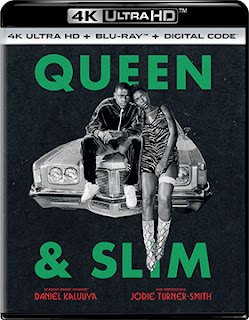 The ARR is 95 days and domestic box office receipts currently stand at $42.7 million.
Planned for release are a stand-alone DVD SKU as well as Combo Packs for both the Blu-ray (with DVD) and 4K Ultra HD (with Blu-ray) formats.

Bonus features begin with commentary from director/producer Melina Matsoukas (former music video director for such recording artists as Beyoncé, Rihanna and Whitney Houston), who is joined by writer/producer Lena Waithe.  There are also four production featurettes — “A Deeper Meaning,” “Melina & Lena,” “Off the Script” and “On the Run with Queen and Slim.”