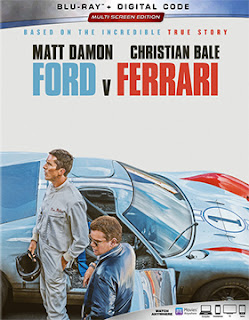 The sleeper Oscar contender for 2019 is none other than director James Mangold’s automotive “thriller,” Ford vs. Ferrari, starring Matt Damon as Carroll Shelby and Christian Bale as Ken Miles.

With Once Upon a Time … in Hollywood and The Irishman locked in a tight race for Best Picture — coupled with the late surge by director Sam Mendes’ 1917 — creates a very fractured voting field which could yield a dark horse surprise.   Don’t you just love a race … Oscar, automotive or otherwise!!

In any case, 20th Century-Fox Home Entertainment announced this past week that Feb. 11 will be the street date for a three-SKU offering of home entertainment packaged media products.

The ARR is a quick-to-market 88 days and domestic box office receipts currently register a stellar $110 million.   Of note, the Oscar announcements are Jan. 13 and the telecast take place on Feb. 9, so the timing for the home entertainment rollout of Ford vs. Ferrari is right in the sweet spot.

Planned for release are DVD and Blu-ray selections, plus a 4K Ultra HD/Blu-ray Combo Pack.

As to bonus treats, there are two featurettes — “The 24 Hour Le Mans: Recreating the Course” and “Pre-Vis: Daytona & Le Mans Races” — plus an eight-part documentary on the making of the film titled Bringing the Rivalry to Life.