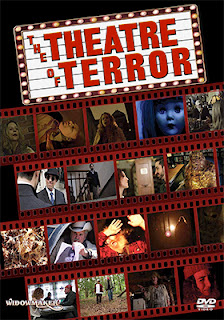 Bayview Entertainment looks to Feb. 25 for the DVD debut of writer/director Tom Ryan’s anthology horror treat, The Theatre of Terror.

In the same spirit as the great Amicus Films horror anthology films of the 1970s, The House that Dripped Blood, Asylum and Tales from the Crypt, comes The Theatre of Terror, which features a classic wrap-around story and four short tales of horror and sci-fi.

An iconic theatre (Loew's Jersey Theatre standing in) needs volunteers and Amber (Lauren Renahan — Pretty Fine Things) answers the call, only to find that the place is empty, save for Colin (played by filmmaker Tom Ryan).   He insists on giving her a tour of the grand cinema palace and once inside the lovely Amber is treated to a special screening.

The first of these short films is The Gift, which features Donna (Heather Brittain O'Scanlon — Rearview Mirrors, Tom’s Dilemma), a “working girl,” who accidently kills a “client” and makes a run for it.   She finds herself taking refuge in a rundown curio shop operated by “The Shopkeeper” (Adam Ginsberg — Pretty Fine Things), where she tells him her story of drugs, lost hopes and more … so he gives her a “special” gift. 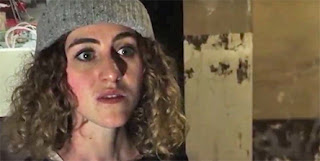 After that little jolt, Amber watches her second short film courtesy of Colin.  This one is titled The Bookworm, which finds Mark (Scott Gorbach) using his inheritance to buy a complete library of old books … only to discover something more than books comes with his new collection.

Amber is then treated to a third film, Abducted, which has a change of pace as we switch from horror to the horror that lurks within a sci-fi tale.  Here we meet Ned (Russell Hackett) and his dog Boo out camping (and looking for a missing treasure).   He witnesses a UFO landing and soon discovers why people have gone missing in Chavez County!! 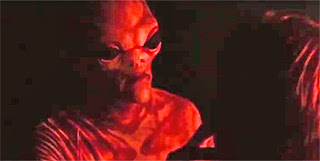 Finally, Colin unspools the fourth film for Amber to “enjoy.”   This one is titled Endangered, and it features a creepy cabin in the woods where three environmentalists — out to save grey wolves — meet a mysterious woman who shares their passion.

And what of Amber?   Feb. 25 and the DVD debut of The Theatre of Terror to find out what happens to her at the hands of the mysterious Colin. 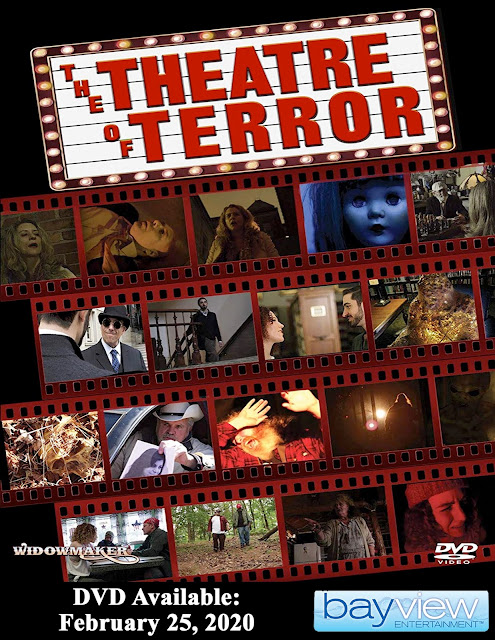