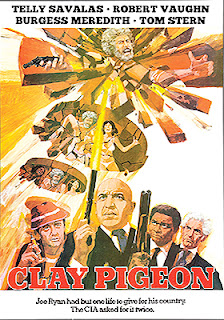 We can only speculate as to why it took so long for this film to finally reach the DVD marketplace (rights, etc.), but to fully understand how the film got made in the first place, you have to go back to 1969 and Hells Angels ’69, which was written by and starred Tom Stern.

After appearing in both The Devil’s Brigade and Angels from Hell the previous year (1968), he then wrote the script for Hells Angels ’69 and teamed up with Jeremy Slate (Stern and Slate had worked together in The Devil’s Brigade), who had, in turn, established himself with Tom Laughlin’s The Born Losers in 1967 and Mini-Skirt Mob in 1968 as an “outlaw” type (it didn‘t hurt that he had worked with John Wayne in both The Sons of Katie Elder and True Grit) and together they delivered a drive-in gem.

Tom Stern took the money — and fame — from the biker flick and parlayed it into a production and distribution deal (with MGM) for Clay Pigeon.   He produced, starred-in and took over the direction at some point.

Stern plays Joe Ryan, a Vietnam War vet who returns home (a hero) and drops-out.   Long-hair, hippy, Hollywood, he could easily fit in with the street people of Quentin Tarantino’s Once Upon a Time … in Hollywood.

Busted for some minor shenanigans, Joe is approached by Federal Bureau of Narcotics (predecessor to the current-day DEA) agent Frank Redford (Telly Savalas) to go undercover in an effort to bust drug lord Henry Neilson, aka: Tallin (Robert Vaughn).   When Joe refuses, Redford sets him up by putting out information that he, Joe Ryan, is actually the mysterious Tallin.

Joe goes on the run, Tallin and his crew go after him … as do the cops who don’t know that it’s all a double-cross set-up.   Meanwhile, the shifty Redford just sits back and waits for things to play out.   Brutal.
First time on DVD, Clay Pigeon from MVD Entertainment Group on Mar. 17 has to be on your must-see list. 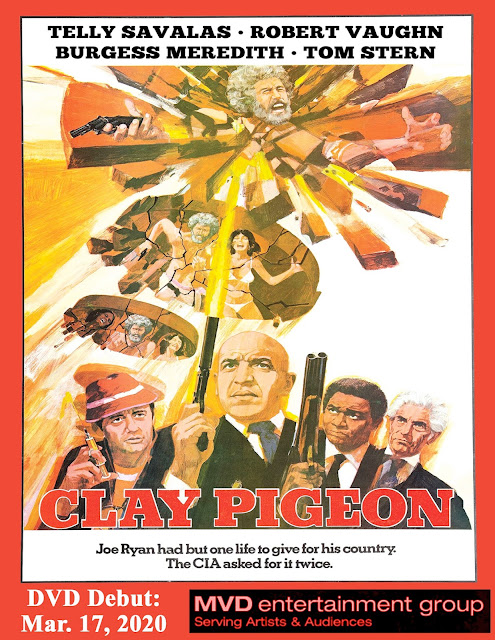