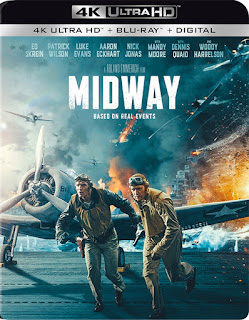 Lionsgate Home Entertainment has assigned Feb. 18 as the street date for director Roland Emmerich’s Midway, the richly detailed retelling of the naval engagement in June of 1942 between the U.S. Navy and the Imperial Japanese Navy that changed the course of World War II in the Pacific.

The ARR comes in at 102 days and domestic box office receipts currently stand at $56.5 million (another $67 million in foreign markets).

Planned for distribution are Combo Pack editions for both the 4K Ultra HD (with Blu-ray) and Blu-ray (with DVD) formats, plus a stand-alone DVD viewing option.

Bonus features include commentary from director Roland Emmerich (Independence Day, The Patriot, Day After Tomorrow) and no less than six production featuettes — “Getting It Right: The Making of Midway,” “The Men of Midway,” “Roland Emmerich: Man on a Mission,” “Turning Point: The Legacy of Midway,” “Joe Rochefort: Breaking the Japanese Code” and “We Met at Midway: Two Survivors Remember.”