Sony Pictures Home Entertainment Blindsided By Retail With Street Date News For A Beautiful Day in the Neighborhood • Feb. 18 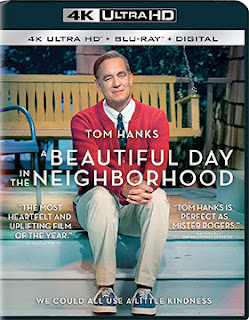 Amazon, Best Buy and Ingram’s Videoeta.com website enjoy leaking street date information on recent Sony Pictures’ films making the transition from their current theatrical venues to the home entertainment arena.   It must be a game; some sort amusement … and Sony is the favorite target.

The latest to get an all-in street date announcement before Sony Pictures Home Entertainment could issue a formal press release is director Marielle Heller’s A Beautiful Day in the Neighborhood, starring Tom Hanks as the iconic Mister Rogers (aka: Fred Rodgers).   Mark Feb. 18 on your viewing calendar for a three-SKU product launch.

The ARR is just 88 days and box office receipts currently stand at $58.8 million.

Planned for release are Combo Pack editions for both the 4K Ultra HD (with Blu-ray) and Blu-ray (with DVD) formats, plus there will be a stand-alone DVD viewing option.
We are as shocked — just as shocked as Tom Hanks appeared to be during Ricky Gervais’ Golden Globe Awards opening monologue — to report that none of the early claim-jumpers provided any details relating to bonus features.

Email ThisBlogThis!Share to TwitterShare to FacebookShare to Pinterest
Labels: Sony Pictures Home Entertainment Blindsided By Retail With Street Date News For A Beautiful Day in the Neighborhood • Feb. 18