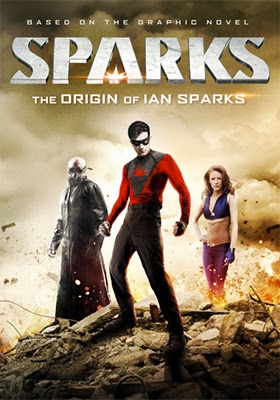 Writer/director Christopher Folino teamed with fellow filmmaker Todd Burrows for the award-winning combination film noir and superhero thriller Sparks (based on the comic book series of the same name), which will be making its way to DVD on Mar. 11 courtesy of Image Entertainment.

A throwback film — set in the noirish timeframe of the 1940s — finds Ian Sparks (Chase Williamson — John Dies at the End) trying to make the best of it after his parents are tragically killed in an auto accident.   At first all seems wonderful when this would-be masked avenger hooks up with the stunning Lady Heavenly (played to perfection by Ashley Bell, who appears to be doing all of her own stunts — best known as Nell in The Last Exorcism and The Last Exorcism, Part II) and they are able to combine their passion for crime fighting with romance.  But their bliss is shaken to the core when they cross paths with Metanza, a serial killer and an utterly ruthless villain.

It may come as a surprise to some — even shock — but Metanza is played by the comic book series co-creator, William Katt, who knows just a little bit about superheros.   Just take his Ralph Hinkley character from The Greatest American Hero and turn it completely inside out and upside down … that’s the evil of Metanza.

Not only do you have a top front line cast in Folino’s Sparks with Williamson, Katt and Bell, but the supporting cast is also top-notch (Clint Howard, Clancy Brown and Jake Busey … among others) and both the special effects and all of the post-filming work (editing, music, etc.) belie the production budget … it is easily what you would expect from a similar studio-level film production (how they pulled it off has be a combination of industry experience and planning).

No word at this time on bonus features … or if the film is going to get a brief theatrical break during the run up to its DVD debut.   This is certainly one worth marking on your must-see calendar come Mar. 11.