Paramount Home Media Distribution Brings I Love Lucy: The Ultimate Season One To Blu-ray On Apr. 8 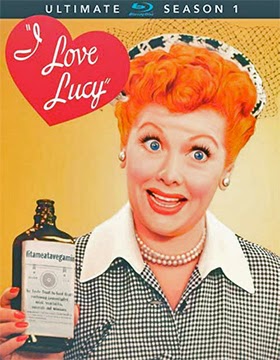 Lucy turns Blu on Apr. 8!   That’s the street date that Paramount Home Media Distribution has selected for the Blu-ray debut of I Love Lucy: The Ultimate Season One.

Spread over six-discs are all 35 episodes from the 1951/52 debut season of what is arguably one of the best television sitcoms ever produced.   Plus the original (unaired) pilot for the show has been restored from the original 35mm film elements and will be presented in color.

Other bonus goodies include home movies from the set (also in color) and wardrobe and makeup test for both Lucile Ball and Desi Arnaz.

Another vintage TV series heading to Blu-ray on Apr. 8 is The Andy Griffith Show: The Complete First Season.   The four-disc set features all 32 episodes complete with the original broadcast sponsor openings and signoffs.

In other TV series release news from Paramount, Star Trek Enterprise: The Complete Fourth Season (and a complete series box set) is slated for a six-disc Blu-ray release on Apr. 8, plus a double-disc DVD SKU of Californication: The Sixth Season will be available on Mar. 25.

Email ThisBlogThis!Share to TwitterShare to FacebookShare to Pinterest
Labels: DVD and Blu-ray Release Report, Paramount Home Media Distribution Brings I Love Lucy: The Ultimate Season One To Blu-ray On Apr. 8