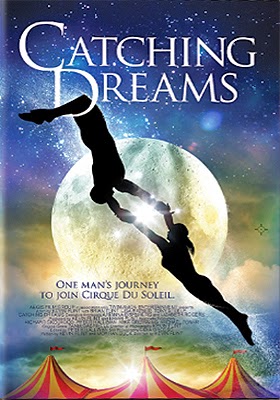 Indican Pictures has selected Jan. 21 as the DVD release date for documentary filmmaker Kevin Flint’s insightful and feel-good look at his brother, Brian Flint, and his quixotic quest to become a center ring trapeze artist.   The film is titled Catching Dreams.

Brian Flint had a successful career going in the financial industry as an investment banker with a secure future and all that goes with it.  But that wasn’t his dream … making money was not what he wanted to do with his life.  Instead, this one-time water polo combatant for a position on the U.S. Olympic Water Polo Team chucked it all and began an eight-year quest to become an aerial trapeze artist for Cirque Du Soleil.

As the film unfolds we see that Brian’s goal is one that most would have given up on early on.  He had a serious injury at the Cirque Du Soleil training camp which should have ended his career, but once his injuries healed he took to the road and literally traveled the world learning the craft before returning once again to Cirque Du Soleil for a fourth — and last — attempt at making the cut … eight years out of his life and four auditions to fulfill his dream (sorry, you will have to see Catching Dreams on DVD on Jan. 21 to see if he made it).   Was it worth it … you be the judge!!!