Well Go U.S.A.'s The Truth About Emanuel On DVD This Coming Mar. 25 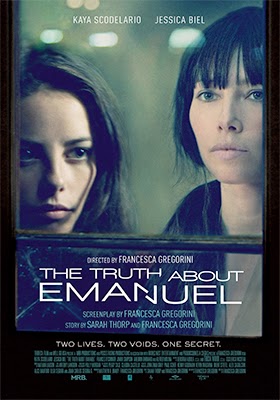 The film, of course, was simply titled Emmanuelle, but that hasn’t stopped anyone from making sequels and spin-offs — with various spellings on the name — to point where even the most ardent of Emmanuelle affectionados have long since given up caring about such things.

Thankfully, The Truth About Emanuel is not even remotely related to this sub-genre of films.   Well Go U.S.A. has captured writer/director Francesca Gregorini’s film distribution in the domestic market and announced this past week that DVD and Blu-ray editions are planned for Mar. 25.

The film debuted at Sundance last January and worked the festival circuit throughout 2013 … racking up awards along the way, including honors for director Francesca Gregorini (only her second film … the first being the 2009 release of Tanner Hall) and her cinematographer, Polly Morgan.   A limited theatrical break is planned for Jan. 14 to help raise further awareness for the home entertainment launch.

Kaya Scordelario (perhaps best known as Effy in the TV series Skins) is Emanuel, a SoCal teen who is basically a temper-tantrum brat with a gutter mouth who gives her father Dennis (Alfred Molina) and stepmother Janice (Frances O’Connor) the full force of her wrath.

And why?   Because her mom died giving birth to her and she hasn’t been able to move beyond it.  Being a teenager, you would have thought that she might have other things to obsess on by now.

Things change — dramatically — when Linda (played by Jessica Biel), a single working mom with an infant, moves in next door.   She bears, in Emanuel’s mind, a striking resemblance to her dead mom and this flips the prickly teen into a “sugar and spice” fantasy mode with offers of babysitting and help with chores for her new neighbor.

Perhaps this is what she needs, something of a cathartic break from the past!   However, when you toss in a few secrets here and there and then mix in the sexual (dating) awakenings of a teenage girl — who has become fixated on her neighbor as the image of her long dead mother — you can only imagine that her “break” will not be in the normal sense.

With top-notch acting from the leads, especially Scordelario, sure-handed direction and writing from Gregorini and technical aspects that belie the film’s production budget, this taut thriller — The Truth About Emanuel — should be high-up on everyone’s must-see list come Mar. 25.