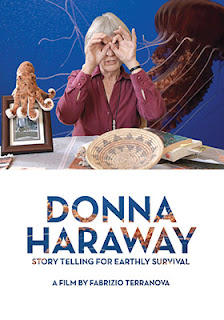 What would can you say about a film that has had weekly screenings — across the globe — since May of 2015?   You read that right, continuous screenings for over three-and-a-half years!!    That’s unheard of … a feature film, whether a documentary or otherwise, might work the festival circuit for a year; 18 months or perhaps a bit longer, but that’s the limit.

Documentary filmmaker Fabrizio Terranova’s Donna Haraway: Story Telling for Earthly Survival has globetrotted from one venue to the next since it was first screened at the Kunstenfestivaldesarts in Bruxelles in May of 2015.   Since Terranova is a Belgium filmmaker that was an appropriate place to the launch the film.

In addition to festival screenings, Terranova’s film has worked academic venues, museums, even book stores … anywhere willing to host it and there it was.   It has to be some sort of record.

In any case, word arrived this past week from Icarus Films that Donna Haraway: Story Telling for Earthly Survival will be available on DVD this coming Mar. 5.  An already built-in audience will certainly be lining up for copies to revisit it, while those who have lacked access to a “screening portal” will finally have their chance to see what it is all about.

Donna Haraway, professor — Ph.D. in Biology from Yale and Professor Emerita in the History of Consciousness Department and Feminist Studies Department at the University of California, Santa Cruz — is a renown author with books spanning four decades.   Included in her works are: “Simians, Cyborgs and Women: The Reinvention of Nature,” “The Companion Species Manifesto: Dogs, People, and Significant Otherness” and “When Species Meet” (among others).

Documentary filmmaker Fabrizio Terranova’s gives us an intimate look at Haraway (along with her dog, Cayenne) with sessions that were filmed over several weeks.   Visually, Donna Haraway: Story Telling for Earthly Survival is nothing like you would expect … the “special effects” are very much in keeping with Haraway’s conversations and insights recorded here.

Included as a bonus feature is a Q&A with Donna Haraway in Los Angeles … the documentary itself is in English and French, with English subtitles where appropriate. 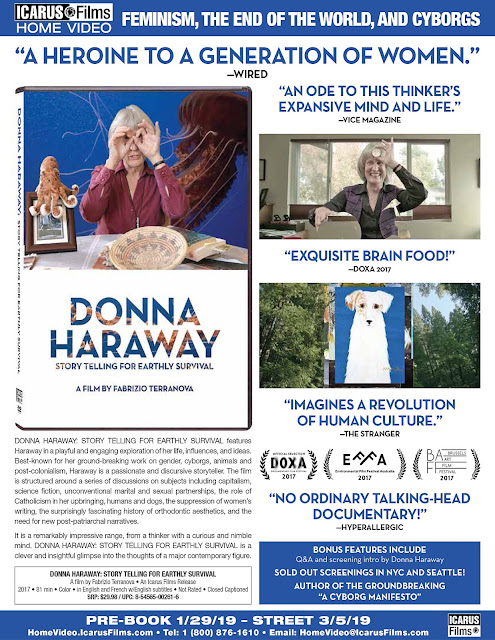