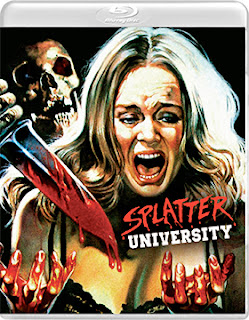 The film restorations from Vinegar Syndrome will be ready for fans, especially genre fans, to enjoy on Jan. 29.  Classics one and all … and all have stood the test of time despite being produced on micro budgets.

A case in point is director Richard W. Haines’ 1984 slasher classic, Splatter University.   A new 2K restoration from the original 16mm camera negative is in the offing.

Haines, who had worked on other indie films in various capacities, finally got a shot at producing and directing his own horror entry.   Filming was supposed to take place over a two-week period at Yorktown, New York’s Mercy College in 1981 (doubling for the blood-drenched Saint Trinian’s College), but scheduling got thrown out of whack and things got rushed.   Next, the modest budget raised for the filming went dry and Haines had to go back to work on other projects to fund the post-production work.

He also had a problem with the running time, which came up short.   Extra footage had to be shot, pieced together with the original footage and post-production was finally completed … it then got a brief release through Troma in the summer of 1984. 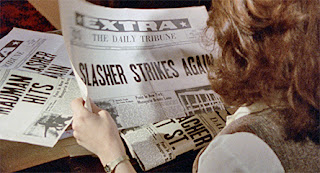 For all of its faults and blemishes, Splatter University has developed a loyal following over the years.   This new 2K restoration and the delivery of the Blu-ray/DVD Combo Pack means those older DVD versions, and especially those aging VHS editions, can be up-graded come Jan. 29.

Bonus goodies include two commentary options — one with director Richard W. Haines (Class of Nuke 'Em High) and a second featuring “The Hysteria Continues!” — a video session with composer Christopher Burke, the theme song from the film, “You Don't Like Me” by The Tennessee Pedestrians and a still gallery. 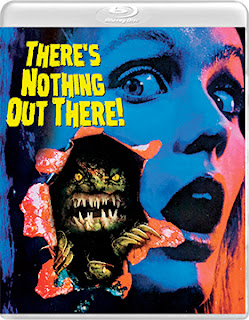 Joining Splatter University on the Jan. 29 film restoration calendar from Vinegar Syndrome is writer/director Rolfe Kanefsky’s twisted 1991 direct-to-video sci-fi thriller, There's Nothing Out There.  Any film that features a brain-slurping, rapist frog alien is something that can only be called unique, which transcends to “cult status” as the decades have rolled by.   There's Nothing Out There will be making its Blu-ray debut (Blu-ray/DVD Combo Pack) and comes loaded with bonus features.

Counted among these are two vintage commentary options — the “20th Anniversary Commentary” featuring filmmaker Rolfe Kanefsky and an archival group commentary with producer Victor Kanefsky and writer/director Rolfe Kanefsky, who are joined by actors Craig Peck and Mark Collver.    There is also a commentary track from “The Hysteria Continues!,” plus a newly-minted video session with Craig Peck and a pair of featurettes — “There’s A Movie Out There” and “40 Years Of Cutting.”

Rounding out the bonus nuggets are a vintage video session with Rolfe Kanefsky and four short films — “Copycat,” “Murder in Winter,” “Just Listen” and “Mood Boobs.” 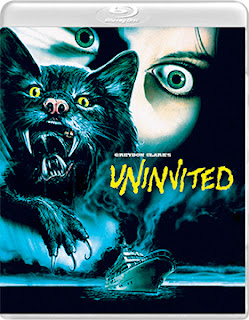 Another direct-to-video feature film release that has aged well is writer/director Greydon Clark’s 1988 plague-cat horror tale, Uninvited, which plays as a haunted house thriller — only on a yacht at sea — with the killer just an ordinary house cat … with a bio-weapon disease.

This new 4K restoration (from the original 35mm camera negative) features two cuts of the film — the domestic market cut and the “international” release version.  There is also a commentary track by writer/director Greydon Clark (Satan's Cheerleaders, Without Warning, The Forbidden Dance, etc.) plus featurette titled “That Darn Mutant Cat.”

Rounding out the Jan. 29 mix is adult filmmaker Lee Frost’s 1974 film, A Climax of Blue Power, which is making its Blu-ray debut here (Blu-ray/DVD Combo Pack).

Back in the day, adult filmmakers looking to avoid jail time built a narrative into their adult bump and grind action, which proved to be a savvy way to give them legal coverage under the freedom of speech aspects of the Constitution.   Frost also shot his adult films on real film — 35mm film at that (Vinegar Syndrome has a 2K restoration).   A Climax of Blue Power features both adult action and a sophisticated storyline … they simply don’t make them like this any more!