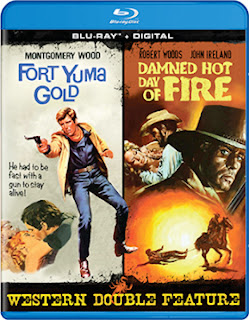 Gold, guns and a double-helping of “spaghetti”  — Spaghetti Westerns, that is — awaits collectors on Mar. 5.   That’s what Mill Creek Entertainment has in store for fans with the priced-to-collect Blu-ray double feature (with Digital Copy) of Fort Yuma Gold (aka: For a Few Extra Dollars) and Damned Hot Day of Fire (aka: Gatling Gun).

Fort Yuma Gold — filmed in glorious Technicolor — stars Spaghetti Western stalwart Montgomery Wood (aka: Giuliano Gemma) as a former Confederate soldier, who is now working undercover for the government.  It seems that a rebel officer, Major Sanders (Jacques Sernas) continues to fight the war and plague frontier outposts with his outlaw raiders … his target this time is the gold at Fort Yuma.

The real mission, a deadly mission at that, is to uncover the Union officer who is working with Sanders and feeding him information about troop movements and gold shipments.   Complicating matters for our hero are the charms of saloon “girl,” the alluring Connie Breastfull (played by Sophie Daumier).

Teamed with Fort Yuma Gold is writer/director Paolo Bianchini’s Technicolor presentation of Damned Hot Day of Fire (aka: Gatling Gun), which finds Tarpas (John Ireland) kidnapping the famed Richard Gatling (Ennio Balbo), the inventor of the Gatling Gun, with plans to turn him and his plans for the weapon over to the Confederate Army.   Dispatched to stop him is disgraced Captain Chris Tanner (Robert Woods), whose mission is to find Tarpas and his hostage and stop him in his tracks … at all costs!